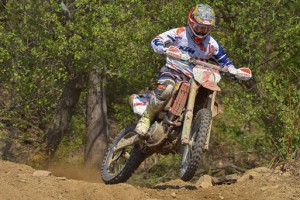 FMF KTM Factory rider Kailub Russell earned 2nd overall at the sixth round of the GNCC Series to further increase his point lead in the championship standings. His teammate, Kacy Martinez, also increased her lead in the standings after claiming her fifth win of the season in the WXC class.

The location for the sixth round was new to the GNCC circuit and consisted of terrain that was dry, with large roots and sharp rocks. The course was 11.5 miles with some fresh cut trail and the pro riders were able to do six laps over the three-hour duration of the race.

Russell got a great jump off the start of the XC1 Pro class and was able to come around the first corner in 3rd position. He moved into the lead after the first lap and led until the end of lap three. At that point, Russell was passed by Chris Bach. Russell remained close for the next two laps and actually got into the lead before the 2 lap card but crashed shortly after.

"I crashed right after the two lap card and just couldn't catch-up after that," stated Russell. The KTM factory rider eventually settled for 2nd and still managed to further increase his point lead in the championship standings. 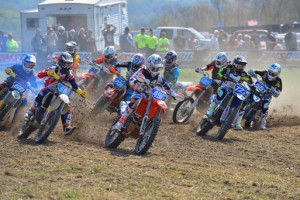 "It was a tough day for sure," stated Russell. "I never really felt comfortable today. I didn't feel like I rode to win today and struggled with bike set-up and a lot of dust on the rough track. It's not the end of the world that I got 2nd place and I'm happy to still walk away with some good points toward the championship."

Martinez pulled the holeshot in the WXC class. She led the race early on and made one mistake on the first lap that dropped her to 2nd place. She quickly rebounded and moved back into the lead and went on to win the race by 2 minutes. Now six rounds into the series, Martinez has a comfortable lead in the championship points.