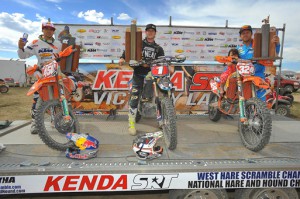 The course consisted of two 50 miles loops that were more tight and technical than most Hare & Hound events. The tighter nature of the course caused the laps to last longer than normal. Ramirez got a great jump off the start of the bomb as his KTM dirt bike hooked up well in the sand section off the start. He grabbed the holeshot and led the first 30 miles of the race before he made a wrong move on the course and got lost. He had to turn around and go back which caused him to drop to 3rd place.

Meanwhile, Sutherlin also had a decent start and was 4th at the end of the bomb run. Sutherlin remained in 4th place through the end of the first loop right behind Ramirez. Shortly after the first pit at the end of loop one, Ramirez made a pass for 2nd in a sand section and took over the runner-up position. Heavy dust made it hard to push forward and catch the leader which resulted in Ramirez finishing 2nd overall for the day. Sutherlin also made a pass on the second loop to move into the final podium positon about halfway through the loop.

Now five rounds into the series, Ramirez sits 2nd overall in the point standings just five points shy of the lead rider. Sutherlin, after missing one round, is still ranked 4th overall.