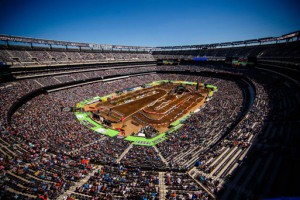 With a rich history in the Phoenix market, Monster Energy Supercross will make its debut at University of Phoenix Stadium, home of the NFL's Arizona Cardinals, which hosted the Super Bowl in February. Gillette Stadium is home to the NFL's Super Bowl-winning New England Patriots and sits approximately 20 miles from Boston. Serving as the 15th race of the championship, the Gillette Stadium round complements the race at MetLife Stadium in East Rutherford, New Jersey, the following weekend and is part of a growing East Coast expansion.

"The West Coast has always provided a great start to the Monster Energy Supercross season, and we are making key changes to the schedule in 2016 to expand the audience and bring it to more East Coast markets," said Ken Hudgens, COO, Feld Motor Sports. "If last week's race at MetLife Stadium was any indication on how vast our fan base is, Gillette Stadium will be the place to be on April 23, 2016."

The highly anticipated Canadian return of Monster Energy Supercross will take place on March 12, 2016. From 2005 to 2014, the race at the Rogers Centre enjoyed a 52-percent increase in attendance. San Diego's Petco Park hosted its first-ever Monster Energy Supercross this year, attracting 42,017 fans. As the home to MLB's San Diego Padres, the venue will host two races in 2016: January 16 and February 13.

"Going to new venues like Gillette Stadium and University of Phoenix Stadium is always exciting for us," said Ryan Dungey, recently crowned 2015 Monster Energy Supercross Champion. "Bringing the championship to new markets and fans will only help grow the sport, and I look forward to meeting the fans at the races in 2016."

Keeping with tradition, the season will open at the Angel Stadium in Anaheim, California, on January 9, and will conclude at Las Vegas' Sam Boyd Stadium on May 7. Angel Stadium, which is considered the proverbial home of Monster Energy Supercross, will host a second race on January 23.