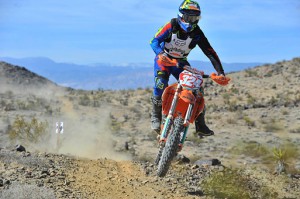 FMF KTM Factory support rider Gary Sutherlin returned to the center of the podium with his second win of the season at round four of the AMA National Hare & Hound Series. His FMF KTM Factory teammate, Ivan Ramirez, finished a close second resulting in a 1-2 sweep for KTM.

Both Sutherlin and Ramirez got off to a great start as the duo rounded out the bomb in third and fourth place. After the first loop, Sutherlin came about one minute behind the leader, Ricky Brabec, while Ramirez was 21 seconds behind Sutherlin in third.

Sutherlin began closing the gap on the leader during the second loop, which proved to be much more technical than the first. Brabec made a mistake near the end, allowing Sutherlin to make his way into the lead just before the pits. "Since this is my first race back I was only riding at about 90 percent," Sutherlin remarked. "So I knew I just had to be clean with Ramirez so close." 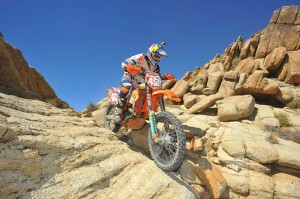 Ramirez held tough on the final loop, where he unknowingly made the pass for second place after Brabec got lost near the end of the loop. "I wasn't sure what place I was in when I crossed the finish," stated Ramirez. "I was very happy to find out that I had moved up to second and am now tied for the points lead."

Sutherlin's victory came as the second one of the season, following a one-round hiatus due to injury. Sutherlin sits only one point away from fourth place in the championship standings, while Ramirez is now tied for first place with 101 points.