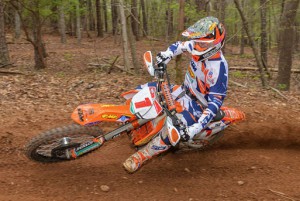 Russell dominated the Big Buck GNCC from start to finish. Russell got a great jump off the line and grabbed the holeshot as the riders came out of the first turn. Once out front, he never lost the lead although he did have a couple crashes.

"I crashed on the opening lap in a pretty fast section but was able to recover quickly and didn't' lose the lead," remarked Russell. A few laps later just 50 yards from the first crash spot, Russell hit the ground again. "This time I kind of lawn-darted myself into a tree and that one hurt. I still managed to get going without losing my lead but I had to charge hard throughout the remaining laps to put a gap on the field again." 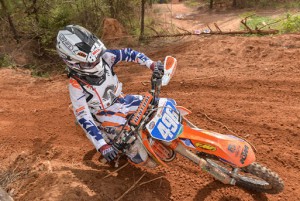 Russell ended up winning the six lap race by just shy of a minute over the 2nd place ride of Josh Strang. With four wins under his belt, Russell now holds a 20 point lead in the championship point standings.

Russell's teammate, Kacy Martinez, also had a solid race finishing 2nd overall in the WXC class. Martinez led the first lap of the race, and unfortunately, lost the lead on the second lap. She went on to hold the runner-up position which still allows her to hold the points lead in the series. 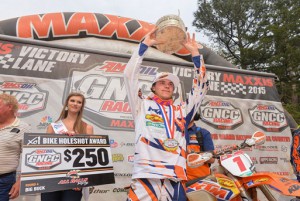