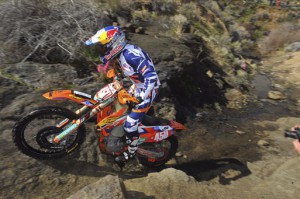 FMF KTM Factory rider Ivan Ramirez took the win at the Rabbit Creek 100, the third round of the AMA National Hare & Hound Series.

Ramirez got off to a great start as the rider's took off down the long bomb. He pulled the holeshot and never looked back on his way to the win. Despite never losing the lead, Ramirez did have to work hard for this victory. After the first loop, he was only 3 seconds ahead of the 2nd place rider as they came into the pits.

"I could hear him right behind me," stated Ramirez. Luckily, Ramirez had a quick pit and was back on the track still in the lead. "I continued to hear him for a while. It seemed like if I had an issue, he would have an issue so I never did lose the lead." 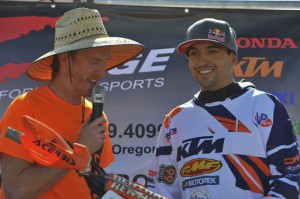 Part way into the second loop, Ramirez was able to pull a gap. "I had started to get a big lead but then I crashed with a few miles to go. I got up quick and was able to cross the checkers about 30 seconds ahead of him. This course was a lot of fun today. It was tight single track down in some sections and then wide open sand washes. I'm really thankful to get this win."

Ramirez's win at the third round marks his first victory of the season. Now three rounds into the series, he sits 2nd overall in the point standings just 4 points behind the lead.