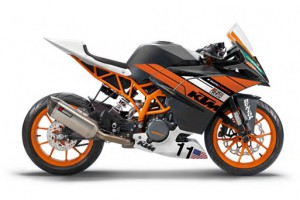 The American Motorcyclist Association has published the technical rules for the 2015 KTM RC 390 Cup class for MotoAmerica, the new home of the AMA Superbike Series.

The technical rules cover motorcycle modifications, tire use and other class-specific regulations.

The KTM RC 390 Cup is a spec class that features competition on KTM RC 390 motorcycles. The class is intended to develop young road racers for professional competition. For bike information and availability, see www.ktmusa.com.