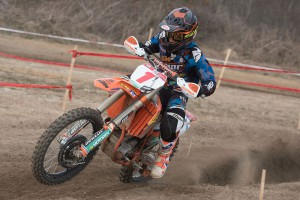 FMF KTM Factory rider Kailub Russell took the win at the opening round of the Kenda Full Gas Sprint Enduro Series after a tight battle for the lead over the two-day series opener.

Frigid temperatures leading up to the event and high winds on day one of the competition made riders skeptical of how the course would turn out. However, both test sections proved to be pretty fun reported Russell. "The track was smooth for the first few tests on Saturday because it was groomed pretty well. Then it got rougher as the day continued which made for some good racing," stated the eventual winner.

The temperature warmed up into the 50's for the race weekend. Russell had a successful first day and came out 2nd overall on day one. "I only won one test section on the first day. I had a rough start losing some time in the first two sections, then got my act together and began to match the lead times," stated Russell. After six tests (three cross-country and three enduro), the KTM rider was 14 seconds behind the lead ride of Daniel Milner at the conclusion of Saturday's racing. 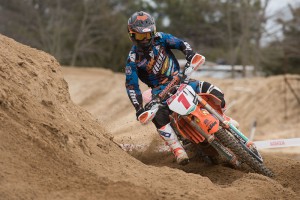 Russell regrouped overnight and came out swinging on day two. Russell won the first three tests of the day and only lost the fourth test by a tenth of a second after a small tip over in that test. He wrapped up the day with another two test wins to clinch the win over Milner by approximately 6 seconds. The factory rider also won the inaugural event last year. His win today makes him two-for-two in this series.

"I had a really good day today. The track was rougher and a light rain this morning made the conditions good. I felt good from the start of the race all the way through the end. Daniel (Milner) put up a fight but I was pumped to come away with the win. I'm looking forward to a good battle in this series."