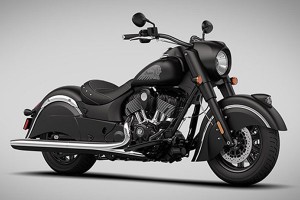 Rumors and teaser photos surrounded Indian's newest bike that was guaranteed to stun riders, and recently the company released the anticipated ride without any fear of it being the middle of winter.

The 2016 Indian Chief Dark Horse motorcycle was finally revealed in Chicago, which surprisingly went well with the theme of the blacked-out ride and the dreary cold city environment. The Dark Horse is more than just an all black version of the Chief. The new ride comes with a Thunder Stroke 111 engine, which packs a tough 119 feet-pounds of torque to rip through any street.

Ben Lindaman, senior product manager for Indian Motorcycle, said the new ride will most certainly grab a lot of attention as it's a completely new style and direction for the company, the source reported.

"The Indian Chief Dark Horse is unlike anything else currently available from Indian Motorcycle," Lindaman added. "While it shares the best traits with other models in the Chief platform, its signature matte black paint and minimalist profile give it an attitude unlike any other Indian motorcycle. We're excited to unveil this new bike at an aggressive price point for a full-size cruiser." 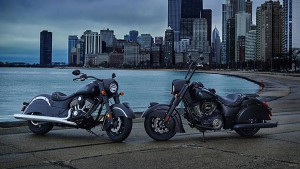 While the matte black motorcycle definitely has a lot of appeal that would likely drive up the total cost, Indian will sell the Dark Horse for $16,999, which is a $2,000 less than its predecessor Indian Chief Classic..

It's single-seat saddle and cast back wheels give the motorcycle a classic, but very contemporary look. Showrooms will soon be showcasing the newest line of Indian rides. This version got rid of its previous model's whitewall tires and used matte black accents that cover the entire bike, except for the chrome exhaust that pairs with the rest of the motorcycle.

The 2016 Indian Dark Horse is one of the lightest motorcycles ever built by the company, but it still comes in a hefty 751 pounds dry, which is only about 27 pounds lighter than the 2015 standard Chief.

"We are targeting a younger guy with this bike," said Lindaman, according to Cycle World. "We're targeted more around the 40-year-old instead of the 55-year-old. We're doing that with the look and with the pricing so that we have a more entry-level bike for heavyweight Indian." 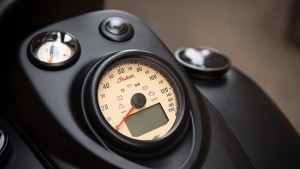 Many eyes will immediately notice the customizable options - from black ape-hanger bars to a high-flow air filter. Even better is the list of standard features. The newest ride has a keyless ignition and comes with a key fob and if you lose the fob, you can enter an individual key code into the ignition to start the bike.

The bike comes with a plethora of gauges for cruise control, real-time clock, tripmeter, battery voltage, gear position, ABS, check engine and heat grip level, which the owner can install separately. Indian hopes the high-powered torque that comes with the Dark Horse will start attracting younger buyers to join Indian.