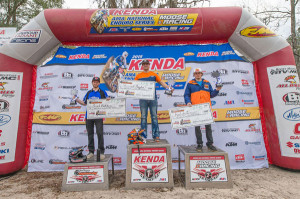 Steward Baylor topped a massive field of off-road competitors this weekend, taking an impressive win at the opening round of the 2015 Kenda AMA National Enduro Series in Sumter, South Carolina.

A record turnout of 825 riders took to Sumter's tight and sandy trails, and after 65 miles of racing, Baylor held off a last minute challenge by FMF/KTM's Kailub Russell to take the overall victory by 13 seconds. Baylor's win was significant in that the 2012 series champion is returning to action this year after spending all of last year recovering from injury.

"It's been a long time coming," said Baylor. "This is where I've wanted to be since 2012, to be on top of the box. The day started out pretty rough, but I just kept pushing and it paid off."

Baylor got off to a rough start in test one, losing valuable time when he crashed midway into the test. However, the Mototech KTM rider quickly regained his footing with a solid win in test two, finishing 10 seconds ahead of 2014 champ Andrew DeLong. In all, Baylor won only two of the six tests on the day, however, consistency paid off in the long run for the South Carolina rider, and he collected to first victory of the 2015 season.

Russell finished up the event with an impressive ride for second place, although he had his ups and downs. On the "up" side, Russell was fastest in the first and last tests of the day. However, a crash in test two left the North Carolina rider 10th fastest for the test. Russell was sixth fastest in test three, but then he started to pick up the pace and was second to Motosport Yamaha's Brad Bakken in tests four and five. A win in the final test allowed Russell to move ahead of Motosport Yamaha's Brad Bakken for second. 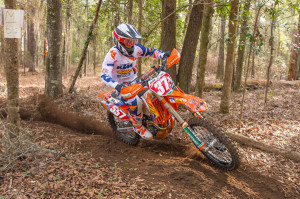 "It was good, bad and ugly," said Russell. "I didn't really get going until the end of the third test, and then I felt like I had a good rhythm."

Bakken rounded out the podium, finishing just five seconds behind Russell. Bakken also got off to a slow start but came on strong in the middle part of the race before a bad final test stopped his momentum.

Fourth went to four-time champ Russell Bobbitt, who is back on KTM after spending the last few years on Husaberg and Husqvarna. The FMF/KTM rider lost considerable time in test four when he took a tumble and bent his controls, but came back with some good rides in the final two tests.

Defending series champ Andrew DeLong ran in second place for most of the day, but a pair of devastating finishes in the final two tests dropped the Rockstar Husqvarna Factory Racing-backed rider all the way down into eighth for the day. 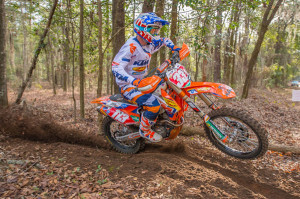 Australian off-road star Daniel Milner was expected to do well in Sumter, however, the Am Pro Yamaha rider ran out of fuel in test one when a mechanic forgot to fuel his bike, and he was not able to start the second test.

Zach Hayes won the Rekluse Expert-AA division, which is considered a stepping-stone for young riders hoping to move into the Pro ranks. The South Carolina rider was seventh fastest in the fifth test and he beat out fellow KTM rider Drew Higgins by three minutes and 49 second for the AA-Expert class-win. He also finished 12th in the final overall standings.

"I was really tight in the first test, and in test two I went over the bars, but then I start getting it together and rode strong for the rest of the race," said Hayes.

Higgins had to overcome arm pump to finish second, while Motosport Yamaha's Ryan Belue was 23 seconds back in third.

The Kenda AMA National Enduro Series resumes action with round two of the series on March 1st in Pelion, South Carolina. For more info on the series check out www.nationalenduro.com. 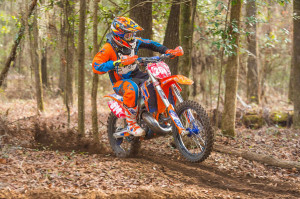 KTM support rider Steward Baylor took the win at the opening round of the AMA National Enduro Series over FMF KTM Factory rider Kailub Russell who earned his career-best National Enduro finish with a 2nd overall.

It was Russell who came out swinging taking the test win in the first test of the day. Unfortunately, Russell suffered a crash in the second test that cost him valuable time. Baylor ended up the eventual winner of the second test to catapult his KTM into the lead.

Russell's teammate, Russell Bobbitt, was also a podium contender throughout the day. Bobbitt was the third fastest rider in the first two test sections before he had a hard crash in test three. Bobbitt was a little banged up but eventually recovered and returned to racing. In the final two tests Bobbitt rebounded and made a charge for the podium but missed the box by five seconds.

Meanwhile, Russell also picked up the pace and finished second fastest in test four and five and took another test win in the final test section. At the end of the race, Baylor edged out Russell by 13 seconds for the overall win.

"Overall I am happy with the day," commented Russell. "It is my best finish in the National Enduro Series, but of course, I want to work harder and be on the top step of the podium. I am looking forward to the next round of the series to come back and fight for a win." 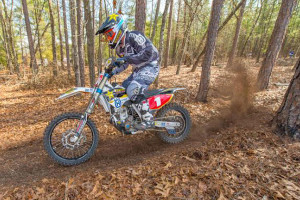 Rockstar Energy Husqvarna Factory Racing's Josh Strang and Andrew DeLong put in solid rides at the first National Enduro of the 2015 season. Good weather and traction made for a nice day as the team rode to top ten finishes. Strang, new to the Husqvarna team, made progress throughout the day battling between 4th and 7th positions, finishing the last two tests strong and ending the day 7th overall. "Today was good. I enjoyed the race but I'm still trying to get used to the different style of racing and the tight trees," explained Strang. "I felt comfortable but a little off the pace. With some more time in the woods and some extra time on the bike it should be good."

Husqvarna veteran and reigning National Enduro Champion, Andrew DeLong, entered his 4th season on a Husky. He battled at the front lines for most of the day but a late race incident dropped him back down a bit, closing out the day in 8th place. "I had a solid day on the FC 350 that worked great, just not the results I was looking for," said DeLong.