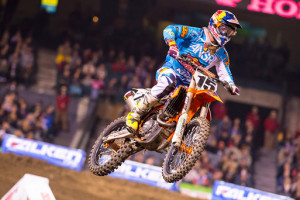 Red Bull KTM Factory Racing Team rider Dean Wilson is now in recovery after undergoing surgery for an injury suffered last Thursday during a practice crash which resulted in a torn ACL and MCL at the KTM test track.

Dean Wilson underwent surgery Wednesday to have the injuries repaired. The doctor's reported that the surgery was successful and he is expected to make a full recovery. The injury will sideline him for the remainder of the Supercross season. His return to racing will depend on his recovery process over the next few months.

"It's really disappointing to see Dean injured this early in the Supercross season," remarked Red Bull KTM Factory Team Manager Roger De Coster. "He has put a lot of work into preparing for Supercross and just as his results were improving, with a 8th at Anaheim 2, this happened. The Red Bull KTM Factory Team is behind Dean in his recovery as we know he is committed to making a full recovery to return to racing."

Wilson reported: "My doctor said the surgery went well and I'm looking at a regular rehabilitation process for my knee. I have been down this road a few times over the past five seasons but I have never been more committed to getting myself back to the top of the mountain. I am focused on a full-recovery for myself, and the people and companies that stand behind me, help add fuel to that fire. I have a major commitment to my team and will do my best to get back to 100% where I can then hop back on my KTM and push it to the front of the field."