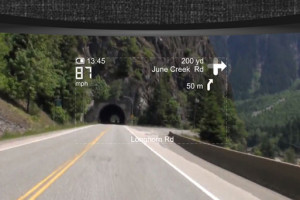 The future of full-faced motorcycle helmets could be something out of science fiction novels, but a Russian startup is trying to get its futuristic gear on the market as soon as possible. According to Tech Crunch, the Russian-based company Livemap recently received a grant from the Russian government, totaling nearly $300,000, to produce a full-faced motorcycle helmet that will have GPS technology and other electric hardware built into the gear.

The voice-controlled GPS will help riders stay safe by giving them something that won't mess with a motorcyclist's field of vision, the source reported. Recently, Andrew Artishchev, CEO of Livemap, told Tech Crunch in an email that it was working on an aspherical lens, which would be "smaller and lighter and sometimes cheaper than the multi-lens design." The CEO added that his main goal was to create a design that will keep the price of optics low.

Dmitri Sizonov, the usability expert for LiveMap, explained that while the company is trying to design something that is cost-effective and lightweight, it also wants users to be safe using the technology while riding, Sputnik News reported.

"We tried to make our interface as simple and as friendly as possible; the picture is always in focus," said Sizonov. "You don't have to switch from the road to the interface. You just look through it and see the interface and the road at the same time."

The interface shows upcoming bends and turns in the road as well as the rider's speed and GPS directions if they are entered. The helmet has LTE 4G Internet connectivity, which allows the voice-based control to work quickly and efficiently if the directions need to be changed mid-ride.

Another motorcycle helmet tech company, Skully, is also trying to get its brand started. Both helmets could be on the market in the near future.