Blake Baggett - Building On His Legacy 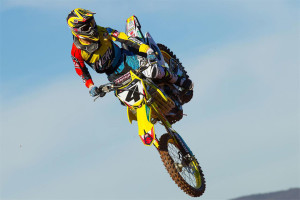 has joined Yoshimura Suzuki Factory Racing after concluding a solid four-year career on 250cc machines where he became AMA 250 Motocross National Champion in 2012 and compiled 14-career wins in the series.

This result placed him tied for seventh with Motorcycle Hall of Fame legends Broc Glover and Marty Smith on the all-time AMA 250 Motocross wins list.

Known more for his abilities on big outdoor motocross tracks than in the close confines of Supercross stadiums, Baggett has nevertheless shown flashes of brilliance during his AMA 250 East/ West Region Supercross career having earned four victories and a host of podium finishes. He owns a pair of 250 SX East victories at the prestigious and grueling Daytona Supercross.

As a dirt bike racer Baggett became one of the elite motocross riders of all time in the 250c class during his four pro seasons. After being a series contender and earning five victories, he finished third in the final 2011 AMA 250 Motocross Series. It was a breakthrough for Baggett and set-him-up for an epic 2012: It all came together for Baggett during the 2012 AMA 250 Motocross campaign, when he again scored five wins and four additional podiums on top of that to secure his first national championship as a pro.

The 2012 championship has proven to be the highlight of Baggett's career to date. In the last couple of seasons he's been plagued by injury, including a bad wrist break that greatly hindered him in 2013. Just prior to the 2014 AMA Motocross season Baggett suffered a scary eye injury, that not only threatened his 2014 season, but came close to costing him the use of the eye. Amazingly Baggett rallied and in spite of still recovering throughout the summer, he challenged for the championship before ultimately finishing runner up in the 2014 AMA 250 Motocross Championship; one of the most outstanding runner-up seasons in AMA Motocross history.

Internationally Baggett has twice been a proud member of the U.S. Motocross of Nations team. In 2011 he was part of the team that won the prestigious international competition alongside Ryan Dungey and Ryan Villopoto.

Baggett - who makes his 2015 debut at this weekend's AMA/ FIM World Supercross Championship opener at Anaheim in California aboard the Suzuki RM-Z450 - hopes to build a legacy on the big bikes, just as he did on the 250s.