Earlier this year, a major announcement came from a classic British motorcycle manufacturer. After a more-than-30-year hiatus, Hesketh Motorcycles announced its newest bike called the 24, Zig Wheels reported. Paul Sleeman, chief engineer and owner of Hesketh, developed and designed the 24, which was motivated by the old design of the Hesketh 308 Formula 1. 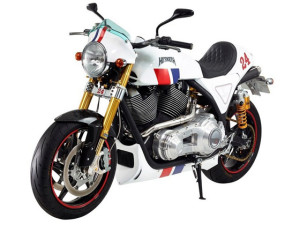 The 308 Formula 1 made famous by James Hunt, who recorded his first Formula 1 victory at the 1975 Dutch Grand Prix. Additionally, the 24 is named after Hunt's F1 car and has the same appearance as well, the source stated. Hunt was recently portrayed in the Ron Howard film Rush, which showed the rise and fall of the team's success.

The motorcycle company was started by Lord Hesketh in Easton Neston, Northhamptonshire, in 1980. Lord H was known as a playboy of sorts from his Formula 1 team success with Hunt in the mid-1970s. The aristocrat wanted to revamp Britain's then-failing motorcycle manufacturing industry with Hesketh Motorcycles.

However, the success was not received after the 1983 release of the Weslake V-twin V1000, which was the first bike released by Hesketh. Another motorcycle company called Hesleydon also got involved with Hesketh and made a faired touring motorcycle, the Vampire, which also saw mild success with a limited amount of bikes released.


Hesketh Comes Back With A Big Punch 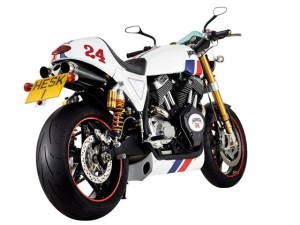 It might have been three decades since the last Hesketh motorcycle was built, but the 24 doesn't seem to skip a beat with its innovative design. According to Zig Wheels, the 24 comes with a 1,900-cubic-centimeter, air-cooled, V-twin motor that releases 127 horsepower around 6,000 rpm. Also, the 144 foot-pounds of torque will have many riders surprised by the power of the 24.

Early on, the motorcycle engineers for Hesketh wanted to use a belt-drive system, however, the massive amount of torque had the manufacturers decide on a chain-drive system instead, the source reported.

According to Motorcycle-USA, roughly 200 motorcycles have been built by Hesketh, but since Sleeman took over in 2010, the plan is get more bikes on the road. However, as of now, there will only be 24 released, but Sleeman said it's only the start to many more bikes.

The bike's saddle is hand-stitched Italian leather and features a carbon dash with wide bars that's not for the faint of heart riders. The full-on rearsets adjust the rider in an downward position with knuckles pointed nearly to the ground.

Additionally, the Hesketh 24 includes Beringer brakes and other top-spec parts like an Ohlins suspension system and a BST sourced Blackstone carbon-fiber wheel set, Zig Wheels reported. While the motorcycle creates serious flashbacks of 70s cafÃ© racers, this retro bike includes modern equipment and a keyless ignition system, which can also be found on the Ducati Diavel.

Each motorcycle comes with a numbered plaque, which is made out of 18-carat gold, on the fuel tank. According to Auto Evolution, the Hesketh 24 will start at $59,380, but the price could increase due to its limited run.