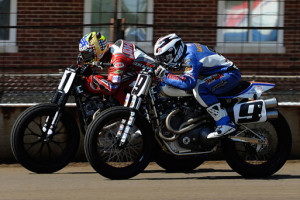 Recently, the American Motorcycle Association (AMA) released the Pro Flat Track 2015 schedule, just a week after they changed the name for the events two racing classes Ultimate Motorcycling reported. Additionally, the association released 12 finalized rounds with the anticipation of four more, bringing the total to 16 rounds for the series.

The Pro Flat Track Expert class name was changed to the Grand National Championship (GNC1) and the Pro Singles class was changed to GNC2. According to the source, the GNC2 class will sport dirt track motorcycle races mainly on single cylinder motorcycles, with a few races on the more powerful twin cylinder bikes that the GNC1 racers will be using for most of their races. Thus the GNC2 class is a good stepping stone for those trying to earn their way into the GNC1 event. However, the GNC1 event will continue to host some of the best dirt track motorcyclists in the world.

According to a press release from AMA Pro Racing, the group is still working with four different locations to host their events. The AMA Pro Flat Track series was started in the U.S. and uses a dirt track for motorcycle racing. It's currently one of the oldest motorsports events in the nation, and the first race sanctioned by AMA happened in 1924 on a one-mile dirt oval road in Toledo, Ohio. 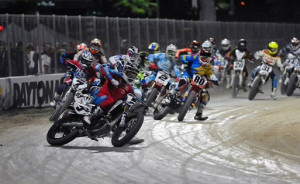 Jim Davis, Hall of Famer for AMA, won the first annual race, which eventually led to several decades of interest in the sport and the eventual creation of the GNC in 1954.

The confirmed dates so far for the 2015 AMA Pro Flat Track Schedule will include two days at the Daytona Flat Track in Daytona Beach, Florida, on March 12 and 13. The next event isn't until May 24, with the Springfield Mile I at the Illinois State Fairgrounds, in Springfield, Illinois.

Then the event will go to the West Coast for the Sacramento Mile at the California Expo Fairgrounds on May 30. Some of the other locations include, Lima, Ohio; Rapid City, South Dakota; Peoria, Illinois; and Pomona, California.