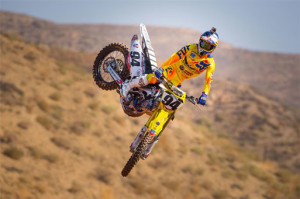 The newly-crowned 2014 AMA Motocross Champion has returned to Suzuki - where he started his career - and is now riding the new factory backed 2015 Suzuki RM-Z450 in AMA/ FIM World Supercross and the AMA Outdoor series next year.

Roczen and the new Ricky Carmichael/Carey Hart-run team starts its 2015 campaign on January 3rd at the opening round of the 2015 AMA/ FIM World Supercross Championship at Angel Stadium in Anaheim, California.