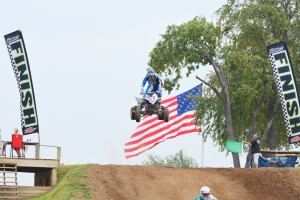 For the First Time Ever Veterans Can Receive Free Admission to each Round of the 2015 Mtn. Dew ATV Motocross National Championship. Photo: Ken Hill[/caption]

In honor of Veterans Day, MX Sports Pro Racing and the ATV Promoter's Group (ATVPG) introduced an initiative with the Veteran Tickets Foundation to recognize the sacrifices made by our service men and women by offering free admission to any round of the 2015 Mtn. Dew ATV Motocross National Championship, sanctioned by AMA (ATVMX). For the first time ever, active and retired military veterans can watch the on-track excitement of the world's premier ATV motocross series at no cost.

In celebration of its 30th anniversary season and in the spirit of Veterans Day, ATVMX has donated 50 General Admission tickets to the Vet Tix foundation for each of the 10 rounds of the championship. Tickets will be available to all military veterans two weeks prior to each event through VetTix.org.

"The donation of free tickets has dramatically widened the range of ways that veterans can relax, enjoy themselves, share smiles with their families and loved ones, and for some, be re-integrated into civilian life," said CEO and Founder of Vet Tix, Michael Focareto.


For the first time ever veterans can receive free admission to each round of the 2015 Mtn. Dew ATV Motocross National Championship. Tickets available through nonprofit organization VetTix.org

All active and retired military veterans can create an account on VetTix.org to receive emails and reminders about when ATVMX tickets become available. More information about Vet Tix can be found at VetTix.org.

The 2015 Mtn. Dew ATV Motocross National Championship kicks off Saturday, March 21, with the inaugural visit to Echeconnee MX Park in Lizella, Georgia. The world's best four-wheel riders will compete over the course of 10 rounds of action on many of the most renowned motocross tracks in the country.

For more information on the 2015 Mtn. Dew ATV Motocross National Championship, visit www.atvmotocross.com. Join the conversation on the series Facebook page, follow on Twitter @ATVMXdotcom and Instagram @ATVMotocross, and be sure to always hashtag #ATVMX.


About the AMA ATV Motocross Championship
The AMA ATV Motocross Championship is the nation's premier amateur and professional ATV motocross series, hosted at top motocross facilities nationwide. The 10-round series features the Nation's best racers, teams and sponsors, and is America's largest and longest-running ATV national motocross program. Since 1985, the series continues to expand and produce top talent from the amateur ranks, while premiering the professional class. For more information, please visit www.atvmotocross.com.