The Italian motorcycle manufacturer Moto Guzzi made a splash at the 2014 EICMA exhibit by giving the public its first look on the three new motorcycles being added to its lineup, Cycle World reported.

The company revealed a different versions of the California 1400 Touring, as well as two new bikes that are in vein of the classic touring cruiser motorcycles. These bikes certainly grabbed the attention of cruiser fanatics and Moto Guzzi was proud to showcase the new variations to its lineup. 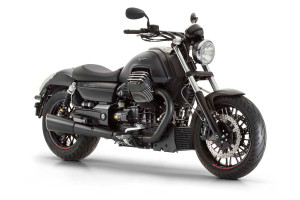 Those searching for an ideal muscle-postured motorcycle might not have to look much further than the Moto Guzzi Audace. This version from the Italian manufacturer stands out among all the other models with a blacked-out styling, classic cruiser round headlight and carbon front fender that gives this bike an absolute sleek and stylish appearance, Motorcycle.com reported.

The Audace's seat is lower than the California 1400's and the footboards and rocker shifter were removed from the motorcycle and replaced with mounted pegs. The adjusted footpegs and lower seat will give riders that classic feel of a more stretched-out riding position. The oversized 200/65 rear-tire is the cherry on top for this classic ride.

The Audace should be a bit faster than the rest of the California 1400 versions, with less weight and the Euro 4-approved megaphone exhausts that will have riders rumbling down streets. 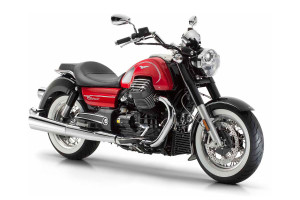 The Moto Guzzi Eldorado is perfect for riders wanting a traditional American-looking '60s sportsbike, but crafted with the appearance fit for 2015 as well, Motorcycle USA reported. The Fat-Boy appearing motorcycle has longer fenders, "bullhorn" handlebars and a heavy-duty USD fork.

The 16-inch spoke wheels and a smaller 180mm rear wheel allow the saddle to be much wider and lower than the standard California 1400. According to the source, the seat height on the Eldorado is only 28.5 inches from the ground. The bike has a smaller pillion pad, passenger grab handles and rider floorboards, which are not found on the Audace.

The round turn signals and "gem-shaped" taillight give the bike a classy presence, the source reported. Additionally, the pinstriped tank and fenders are certainly making this bike look like a flashback to the American-style motorcycle. The Eldorado comes with chrome accents on the headlight trip and on the massive pipes moving down the bike. 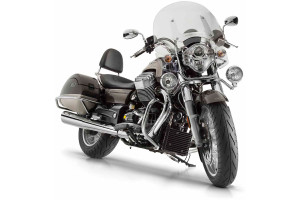 The Moto Guzzi California 1400 Touring SE is a special edition motorcycle released by the Italian manufacturer to give touring riders a bike they can rely on for the long haul, Motorcycle.com reported. The Touring SE has a passenger backrest and chrome handles like the Eldorado, but passengers will have more comfort for long trips and rides.

The Touring SE comes with the trifecta of headlights to give nightriders the most visible roadway and a windshield for debris protection. According to the source, the SE is nearly identical to the California Touring model expect it has a two-tone painted theme, passenger back-rest and grab bars, and a chrome-plated steel fork.

As of now, Moto Guzzi hasn't released the price on any of the motorcycles.