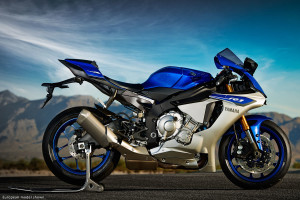 Yamaha recently announced its newest creations, the new YZF-R1 and the nearly MotoGP Yamaha YZF-R1M, at the EICMA motorcycle exhibition in Milan, showing everyone it's doing everything to be atop the superbike world, Gizmag reported.

The motorcycle company had Jorge Lorenzo and Valentino Rossi, both MotoGP stars, showcase the new YZF-R1 and R1M at the Italian moto event. According to the source, Yamaha said this bike is the most MotoGP-inspired product ever created, but some might argue whether or not that title belongs to the Ducati Desmosedici RR.

In the last few years, the superbike market has been an extreme battle between some of the top European motorcycle manufacturers. According to the source, the MV Agusta F4, the Ducati Panigale and the BMW S1000RR have all been trying to outperform one another with higher peak power around the 200-horsepower range, while Japanese manufacturers have only been in the 180hp level.

According to Gizmag, many of the Japanese motorcycle companies have come out of their shell in 2015 to try and overtake the European dominance. Kawasaki just released its H2R about a month ago, and it's already only allowed on the track with its supercharged 1,000cc engine that can reach 300hp. The Japanese company plans to release the H2 that will have 200hp with an extreme power delivery that will be allowed on the road as well. 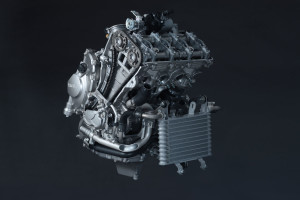 Yamaha is continuing to use a water-cooled inline four engine for its YZF-R1 that includes dual overhead camshafts and a 16-valve cylinder head, Motorcycle USA reported. The engine remains at 988cc, but the crossplane crankshaft design and uneven firing order used for the Yamaha 2009 R1 are also still available on the newest model. However, everything else about the engine is new from Yamaha.

The engine added a new bore/stroke formula that gives more top-end speed and the aluminum-crafted pistons create a higher ratio for pressing fuel. According to the source, fuel injectors are implemented into each cylinder, intaking more air through a 19 percent larger capacity airbox. Yamaha said the engine on the R1 is 1.2 inches narrower around the crankshaft and almost 10 pounds lighter than the 2014 model.

The R1 can reach 150hp from its back tire with a six-speed transmission and includes a cable-actuated racing-style slipper clutch and electronic quickshifter, the source reported. 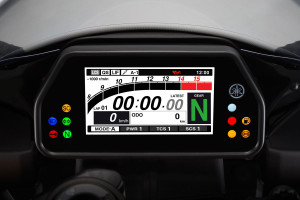 never seems to skimp on electronics implemented into the bike. The newest R1 has a digital six-axis compass and a gyro and accelerometer/G-sensor dash that shows lean, pitch and yaw. The dash also calculates front and rear wheel speeds as well as wheel spin, slide, lift, launch and unified braking control systems.

The dash is a TFT-style LCD monitor that can be altered for street or track purposes. The motorcycle comes in Team Yamaha Blue and White, Rapid Red, Pearl White and Raven. The Yamaha YZF-R1 and R1M will be available in February at price tags of $16,490 and $21,990, respectively.