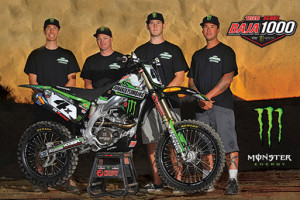 According to Enduro360.com, the first bikes from the 2014 SCORE International Baja 1000 have arrived in La Paz. The top two front runners, Colton Udall's team running the 1x Honda bike and Ricky Brabec on the Kawasaki 4x bike, battled all day for supremacy. For over half the race both bikes were fairly close to each other, when the Kawasaki dirt bike suffered a major setback. Somewhere around mile 670 the rear tire came apart and the team had to make emergency repairs. Luckily for them, rider Max Eddy managed to pit and replace the rear with a used tire, only losing around 20 minutes. Later they would loose about another 20 minutes south of San Ignacio giving the Honda a big lead.

Fighting through the night, the hardworking Kawasaki team managed to shorten the gap and actually took the physical lead near the 1,000 mile mark, with less than 200 miles to go. It is suspected that the Honda 1x rider, Ian Young, might have crashed and broken his arm, which would account for the Honda team's setback.

At the finish line, the Kawasaki was the first to cross, arriving about 20 minutes in the Honda 1x bike. The next bikes were over 250 miles behind, with 3rd overall going to the 349x Honda CRF450X headed by Francisco Arredondo of Guatemala. It appears that they stayed very close to the leaders for the entire race, finishing about 1 hour behind first place.

As always, we will have to wait to see if any penalties are assessed before results are official.