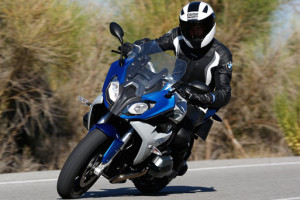 The 2014 Esposizione Internazionale Ciclo Motociclo e Accessori (EICMA) exhibit is just days away and information on newly announced motorcycles and gear is appearing everywhere. According to Motorcycle.com, BMW has confirmed it will launch an exhibit at EICMA showcasing two new motorcycle models.

BMW hasn't released any other information just yet, but the folks over at Motorcyle.com believe it could be a the release of a brand new bike, the BMW S1000XR, that is a cross between an adventure and sport-touring motorcycle that some photographers spotted back in August. From the details of those photos, the engine appears to be similar to the one used for the S1000RR but the body was designed for the growing adventure touring motorcycle market. If true, this bike would likely competes against the Kawasaki Versys 1000, Ducati Multistrada 1200 and the Suzuki V-Strom 1000. Suzuki announced their groundbreaking V-Strom just a year ago, and already, the model would become the most outdated with the others adding serious upgrades. However, that's only true if the BMW releases the S1000XR model.

According to the source, the other likely model to be released at the exhibit in Milan is a new bike based off the BMW K1600. Supposedly a direct competition with Honda's Gold Wing F6B, this new bagger could shake up the luxury touring segment. Some of the rumored reports say the new model will be much lower and have more aerodynamic panniers and a new widescreen with altered fairing.

However, the design of the two new bikes won't be revealed until the EICMA starts. According to BMW, the new R1200R and R1200RS will be present, but details for these new designs have already been released.

Plenty of eyes will be on BMW as EICMA's doors open tomorrow to the press, the general public will have to wait a few more days to see the newly released motorcycles in person.