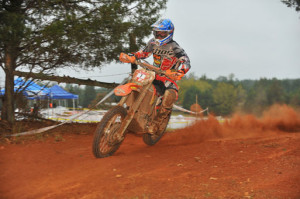 During Saturday's racing, the riders rode two special tests three times each for the fastest time. The weather was warm and the course conditions were dusty as the rider's battled throughout the day. At the end of six dirt bike tests, Russell was able to collect four test wins to earn a 31 second lead at the end of the day. His teammate, Charlie Mullins, collected one test win and also rode strong on day one despite a crash in the fourth test where he lost two minutes.

"I was bummed to crash in that test," stated Mullins. "I was having a good day and feeling strong and unfortunately this will put me back quite a bit." 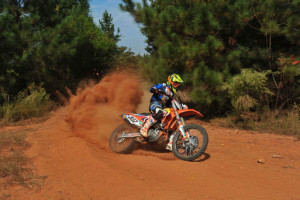 The Baylor brothers, Grant and Steward also raced the Full Gas Enduro and were sitting 6th and 8th respectively at the end of day one.

On day two, Russell and Mullins again had a strong showing. Day two gave the riders a completely different weather forecast with cold temperatures and intermittent rain. Russell ended up with three test wins while Mullins earned two. At the end of the six tests, it was Mullins who had the overall for the day but Russell who took home the overall win with the combined test scores from Saturday and Sunday's results. Steward Baylor ended up 7th while Grant Baylor finished 8th overall.

"I thought this was a great event and a good warm-up for the ISDE which is only a month away," stated Russell. "I hope we can continue to do these types of races in the states to help our ISDE team better prepare for the big race." 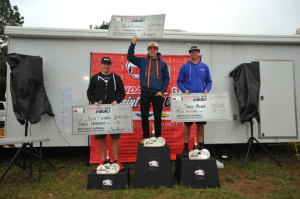