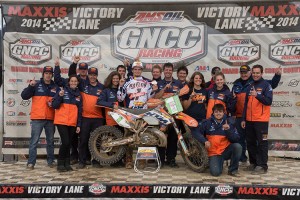 Factory support rider Grant Baylor was crowned the 2014 GNCC XC2 Pro Lites Champion for the second consecutive year at the Powerline Park GNCC where he also took a victory by over four minutes on the next closest competitor.

Baylor was barely edged out for the holeshot off the start of the race and quickly moved his bike into the lead position. Once in the lead, he was able to pull away each lap to stretch his lead out front. By the end of the six laps, Baylor had a four minute lead on the 2nd place rider. He went on to take the win and clinch the championship one week early.

Baylor joined his teammates Kacy Martinez and Kailub Russell who also already wrapped up championships in the WXC and XC1 Pro classes this year to make it a sweep for the KTM brand in the most premier classes of the GNCC Series.

"I am very excited that I was able to repeat my championship this year," stated Baylor. "I have worked hard this season to stay up front and be healthy throughout the year to ensure that I could give this championship my best and it has paid off. I would like to extend my thanks to my team, my family and my friends for their support in helping me achieve this goal." 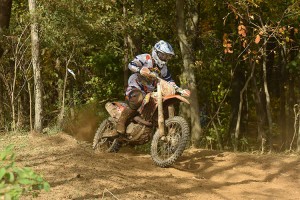 Baylor's teammate, Kailub Russell, also put in a remarkable ride at the Powerline Park GNCC. Russell decided to ride a KTM 150 SX two-stroke bike at this event both to give the fans something new to watch since the championship is wrapped up, but more importantly, to showcase the bike he will raffle off in support of his friend Rory Mead. The bike Russell raced will be auctioned off at the final round with a portion of the proceeds going to Mead for his recovery since his accident earlier this year.

Russell moved into the lead position on lap two and held on to the lead until the final lap. Russell had to pit for gas with one lap to go which is where he was passed for the lead. At that pit stop the team realized Russell's brake pedal was smashed from hitting a stump and extended his stop to replace it. He returned to the race in 2nd place but was too far back from the leader and settled for the runner-up spot.

"We are very impressed with Russell's ride today," stated FMF/KTM Factory Team Manager Antti Kallonen. "This was a very difficult track to race on a small displacement two-stroke and for him to lead as long as he did impressed us all." 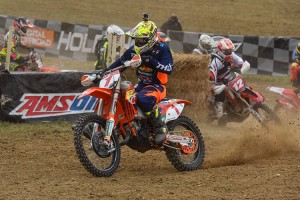 Russell's teammates, Steward Baylor and Charlie Mullins, both made a return from injury at this event and were both running up front early on. It was Mullins who actually led the first lap of the race in his first GNCC since an injury four months ago. Mullins stayed inside the top three for the first half of the race before his wrist became sore and he settled for 4th place. His teammate, Baylor, was near the top three in the opening lap and then fell back to 5th overall on his 250 SX race machine.

The already crowned WXC Champion, Kacy Martinez, had a great start to her day as she led the first lap of the women's class. She pulled her lead to one minute by the second lap before crashing on lap three and injuring her right leg and knee. Martinez tried to race another lap but the pain was too substantial and the team pulled her off for further evaluation. Martinez will now return home to get a better analysis and hopefully heal to return for the final round of the series.