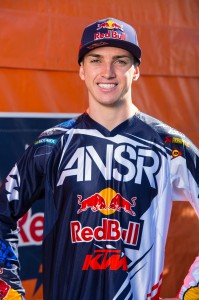 KTM Motorsports is excited to announce the signing of athlete Dean Wilson to the Red Bull KTM Factory Team for the 2015 and 2016 AMA Pro Supercross and Motocross seasons.

"Dean is a very talented rider who has shown a lot of potential on a 450," commented Red Bull KTM Factory Team Manager Roger DeCoster. "In the past two years he has been fortunate enough to have the opportunity to compete in the premiere class in both SX and MX competition and shown he is very capable on the 450. Dean has definitely had his share of bad luck when it comes to injuries and things not necessarily going to plan structurally over the past few seasons. My hope is that with our support Dean will be able to find parts of the puzzle that are missing in his program and go on to experience the same level of success in the 450 class as he did in the prime of his 250 career. I like that Dean is very upbeat and has a fun personality so I think he will have no problems adapting to our Red Bull KTM family." 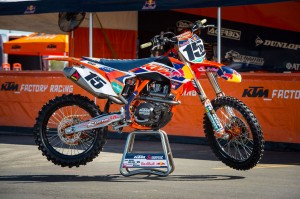 Residing from Scotland, the 22 year-old comes from a notable amateur pedigree that includes 13 titles, two AMA Amateur National Championships and the AMA Horizon Award in 2009. In 2010, Wilson entered his rookie season capturing two podium finishes in the AMA Supercross 250SX East class. That same year Wilson went on to earn his first professional career motocross win at Budds Creek and was named AMA Motocross Rookie of the Year. By 2011, Wilson was becoming a household name to dirt bike enthusiasts by securing his first-ever AMA Supercross 250SX win in Atlanta followed by 11 moto wins in outdoors and the 2011 AMA 250cc Motocross Championship. Sidelined with injuries over the next few seasons, Wilson was still able to attain an impressive 11 Supercross podiums between 2012 and 2014 including four AMA Supercross 250SX main event wins and most recently Anaheim III in early 2014.

KTM has signed Dean Wilson to a two-year contract, which began on October 1, 2014.

"I'm really looking forward to joining a great group of people," said Wilson. "They have accomplished so much the past few years, not only in the U.S. but overseas as well. This is an amazing opportunity for me to learn from Roger and Ian and the rest of the crew. They've put together a pretty amazing team and I'm looking forward to the opportunity."