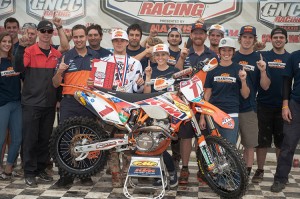 Russell had a poor start off the line and rounded the first corner in dead last. Russell took his time making his way through the pack as the course was very dusty despite a few rain showers that came and went throughout the 2 hour and 40 minute race. At the end of the first 10-mile lap, Russell was sitting in 5th place. On the next lap, he had plowed his way into a podium position and passed for 2nd place. He remained in 2nd place for the next two laps as he inched his way toward the lead rider.

At the halfway point, Russell and leader, Jordan Ashburn, came into the gas stop at the same time. Russell was able to make the pass on Ashburn quickly after the pit stop to take over the lead. Once out front, he put into two solid laps to claim the overall win and clinch the championship two rounds early.

Russell's championship marks his second GNCC XC1 Pro Championship Title for the Factory FMF/KTM Team. "It feels great to get the championship wrapped up early, "stated Russell. "My team worked so hard to help me accomplish this goal and I am so grateful for their hard work. I hope to continue my win streak at the next two rounds to finish the season off with a couple more victories." 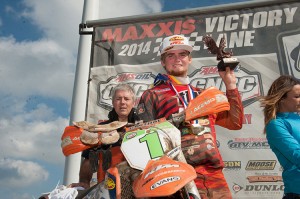 Joining Russell on the podium was his teammate, XC2 Pro Lites rider, Grant Baylor. The young-gun won the XC2 Pro Lites class by over eight minutes on the next closest competitor; a time so quick that he ended up finishing 2nd overall.

"I really wanted to catch Kailub (Russell)," stated Baylor on the podium. "I have been close to winning the overall a couple times this year and could see it in sight again today. I have two more rounds to try to do it, so hopefully I can get it done."

Factory FMF/KTM rider, Kacy Martinez, already crowned the WXC Champion, finished 2nd at the Mountain Ridge race. She was edged out by fellow KTM rider Sarah Baldwin for the win. Brooke Cosner finished 3rd on her KTM to make it and all orange podium.