SPARTANBURG, S.C. - KYMCO USA said it will have 32 off-road vehicles in its 2015 lineup, including four versions of the new mid-sized UXV 450i SXS, four EPS models in the MXU ATV series and two youth quads. Each series also includes a version that celebrates the company's 50th anniversary. 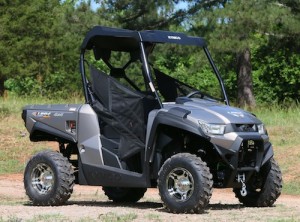 The UXV 450i is a revised design of KYMCO's UXV SXS, featuring a fuel-injected 443cc four-stroke engine. A push button allows the driver to switch between 2WD and 4WD, and the transmission is an automatic CVT system with a differential lock.
The front and rear suspension is comprised of independent dual A-arms with 7.5 inches of travel, and there are 10 inches of ground clearance beneath the chassis. The UXV 450i also has an 8.5-gallon fuel tank and hydraulic disc brakes. 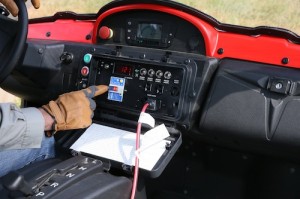 The generator has a GFCI safety circuit breaker and a five-point integrated safety system. The UXV 500i G is available in red, and it comes standard with Tight Turn Turf Control, a soft top and a full windshield. 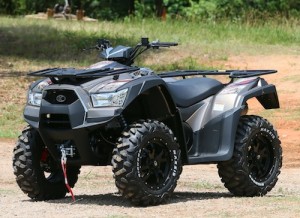 The MXU 500i and 700i ATVs all have an automatic CVT transmission, independent dual A-arm front and rear suspension with a sway bar for over six inches of travel, 100-lb. front rack capacity, 187-lb. rear rack capacity, a two-inch receiver with a 1,050-lb. towing capacity and fender storage compartments. 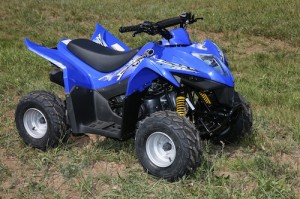 For 2015, KYMCO will have two four-stroke youth ATVs available for young riders. The Mongoose 70S ($2,199) is new, and the returning Mongoose 90S ($2,499) has a new body design and graphics. The Mongoose 90S is designed for riders ten years and older, while the 70cc version is for riders six years and older. Both models have front and rear lights, an auto-stop safety lanyard and color options in red and blue.