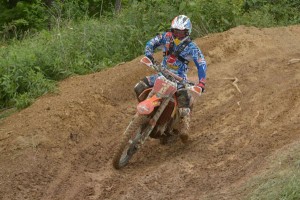 Through the first seven rounds of the 2014 AMSOIL Grand National Cross Country Series presented by Maxxis, an AMA National Championship, it's been a head-to-head battle for the XC1 National Championship between Factory FMF/KTM teammates Kailub Russell and Charlie Mullins. However, with Mullins removed from championship chase due to a recent injury, the reigning champ Russell was poised to take over the points lead on Sunday and he did so in a dominant fashion at the 25th running of the Wiseco John Penton GNCC.

The stage was set at Sunday Creek Raceway in Millfiled, Ohio for a beautiful and dry day of racing. The day began with sunny skies and warm temperatures but a few rain showers in the hour leading up to 1 p.m. start made for an interesting afternoon of racing.

It was the N-Fab AmPro Yamaha ride of Paul Whibley who got off to a great start with the $250 All Balls Racing XC1 Holeshot Award but the two-time champ quickly fell back to eighth place on the opening lap. Russell capitalized on a mistake by Whibley and took control of the pace right away, where he led flag to flag of the three-hour race.

While Russell seemed to have the lead position on lock, it was an all-out battle for second place all afternoon. N-Fab AmPro Yamaha's Jordan Ashburn put himself in a favorable position early on, as he jumped in behind Russell for the second place position. Johnny Campbell Racing Honda's Chris Bach joined the battle, with Rocky Mountain ATV*MC/N-Fab AmPro Yamaha's Josh Strang close behind. The trio exchanged places several times throughout the three-hour battle, making for an exciting spectacle for the race fans in Ohio. 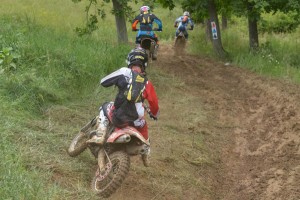 But the battle didn't come only from the front row, as reigning XC2 Pro Lites Champion Grant Baylor joined the front-runners on the adjusted time clock where he threatened a spot on the overall podium all afternoon. Not only were the physical battles full of excitement, but the adjusted time came down to the final moments, where the young Baylor finished nine seconds ahead of Strang to capture second overall for the day.

Strang, who was forced to come from behind on the opening lap, pushed through to second at the end of the five-lap race, where he led a three-way battle into the final moments of the Sunday Creek motocross track. Despite a valiant effort by Ashburn, and also Whibley in the final moments, the 2010 GNCC Champion was able to hold them off to capture a season-best second place finish in the XC1 Pro Class and third overall for the day.

Whibley and Ashburn were bar-to-bar in the final turns but this time it was Ashburn who edged out the two-time champ of Whibley to take third place in the XC1 Class and fourth overall for the day.

Factory FMF/KTM's Steward Baylor Jr. struggled on the opening lap but the South Caroina native slowly picked up the pace as the race went on. After missing the last round due to injury, Baylor fought his way back to a fifth place finish in the XC1 Class. 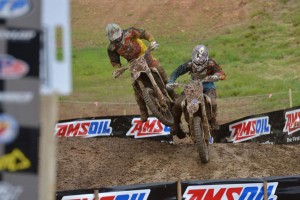 After running inside the top three for a majority of the afternoon, Bach lost a substantial amount of time when he crashed on the final lap while running second. Bach ended up just three seconds behind Baylor for sixth place in the class.

RideMPS.com/AMSOIL/Honda's Thad DuVall returned to action after missing the previous round with injury. DuVall managed a seventh place finish in the class as he continues to recover.

In the XC2 Pro Lites action, Grant Baylor got off to a great start to kick off the afternoon and things only got better for the KTM Support rider as he continued to pick his way through the overall pack on time adjustment. In his quest for an overall position, Baylor put a sizable gap on the rest of the XC2 Pro Lites field. 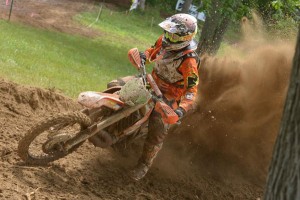 In just his third XC2 race of this season, KR4 Performance-backed Nick Davis put forth an impressive ride at the eighth round. Davis overcame a couple of big crashes early on to secure a season-best second place finish in the XC2 Class.

Raines Riding University/Atlas Cycles' Ricky Russell began the afternoon outside the top ten but was quickly made his way into podium contention. Russell got into the third place position on the final lap, where he finished third place in the class. Baylor now holds a three-point lead over Russell in the XC2 Pro Lites championship standings.

Sam Evans grabbed the $100 DigitalOffroad.com Holeshot Award, finishing sixth place in the XC2 Pro Lites Class. Indiana's Mike Witkowski battled it out for the 250 A Class win and the $125 American Kargo Top Amateur Award with fourteenth overall for the day. 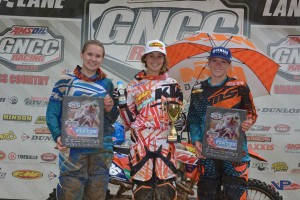 The 2014 AMSOIL Grand National Cross Country Series resumes June 21 and 22 with the AMSOIL Snowshoe GNCC on Snowshoe Mountain Resort in West Virginia. For more information on the series, visit www.gnccracing.com. 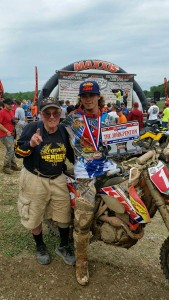 Factory FMF/KTM rider Kailub Russell dominated the John Penton GNCC race to claim his fifth win of the season. His teammate, Grant Baylor, took the win in the XC2 Pro Lites class and second overall for the day.

Russell got a third place jump off the line behind his teammate Steward Baylor, who made his return to racing after four weeks off. Russell quickly moved around Baylor and then Paul Whibley to take the lead. Once in the lead, Russell never looked back. He went on to lead every lap of the muddy race to take the win with a 2 minute and 34 second gap. Steward Baylor would finish 6th overall for the day.

"I always like this race," stated Russell. "I felt good all day and made some solid line choices to put a gap on the rest of the field. I'm happy to stretch my points lead heading to the next round."

Grant Baylor was eighth off the start of the XC2 class and quickly moved through the pack to take over the lead by the 2.5 mile marker. On mile marker 4, Baylor crashed and lost four positions. He had a speedy recovery and soon found himself back in the lead. He continued to turn solid lap times through the remainder of the day to pull a large lead over fellow XC2 competitors while also moving to second place overall.

Factory FMF/KTM rider, Kacy Martinez, took another impressive win in the WXC class. Fresh off an X-Games Gold Medal win in Austin, TX she came into the Penton GNCC with confidence. She earned a great start and ended up winning her class by five minutes as well as the morning overall. 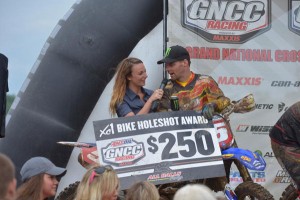 A good start and I snatched the holeshot from Stu Baylor. Running a little deep into turn two I handed a couple positions back. I followed Stu for a few miles until he went down on the slick clay track made slicker by the rain only an hour earlier. I lost sight of the leaders not long before we entered the "Penton Section" and managed to take a wrong turn.

I walked this section the day before, but the track had been changed. Problem was the tape that was put up was too high and I went under it without realizing at first. I quickly noticed there were no fresh tracks in front of me and spun around but lost a lot of time. I later heard that I wasn't the only one who made this mistake and took the old track.

Nearing the end of the lap I got briefly stuck in the mulch pit. It was one of those bizarre times when you just wonder what's going on. I basically tried to avoid a downed rider and got cross rutted. When I tried to get going again I broke through the top layer of the mulch into some slop underneath. A bit of pushing and some help and I was freed quickly. I found myself kinda in no-man's land playing catch up. I felt like I was riding well but didn't seem to be making an impression on the gap to the guys in front.


Over the last couple laps I started to erode the distance to the guys in front of me. Pit board splits were dropping. On the last lap I caught and passed Chris Bach and Stu Baylor. And as we came into the pits about a half mile before the finish I caught sight of Jordan Ashburn. I pushed hard on the MX track and took my shot as we came into the scoring chicane. I got alongside Jordan but short of punting him off the track there was no room to make a pass on the slick clay. 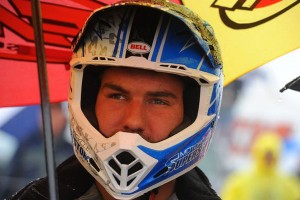 Team Husqvarna's Andrew DeLong pitted himself not only against tough conditions in the John Penton GNCC but also a competitive field to finish eighth in the race with the legendary tough-as-nails reputation.

It was not only race time temperatures in the mid 20- degrees Celsius and high humidity that hindered riders. The pro class contestants also greeted with a drenching rainstorm as they approached the starting line. Andrew DeLong got off to a good start and was able to maintain a brisk pace within range of the leaders in the early stages.

Rain made the track progressively slicker as the race progressed and Andrew suffered a series of crashes that dropped him out of podium contention.Despite the tricky conditions DeLong still managed to bring his Husqvarna FE 350 home in eighth place for a creditable top ten finish.