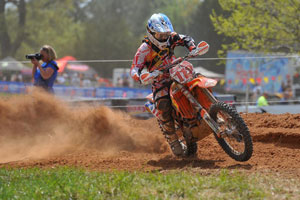 Factory FMF/KTM rider Charlie Mullins was injured in a practice on Tuesday in his home state of North Carolina.

The current point leader in both the AMA National Enduro and GNCC Series injured his wrist in the accident. Mullins underwent surgery yesterday to pin the dislocated right wrist and ligaments that were damaged in the crash. Mullins will remain in a cast until early August at which time he will have the pins removed. He will be released to ride shortly after that and hopes to make a return to dirt bike racing in September.

"This was an unfortunate accident for Charlie who has been on top of his game this year," stated Factory FMF/KTM Team Manager Antti Kallonen. "We will do everything to help him get back up to speed once he is healed and continue to support him to the best of our ability through his recovery process."