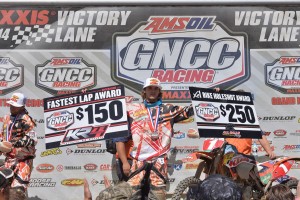 On Sunday, the seventh round of the 2014 AMSOIL Grand National Cross Country Series presented by Maxxis, an AMA National Championship, embarked upon Marvin's Mountain Top in Masontown, West Virginia for the third running of the Rocky Mountain ATV/MC Mountaineer Run GNCC. Reigning XC1 Pro Class Champion Kailub Russell led the three-hour race from start to finish en route to his fourth win of the season.

Factory FMF/KTM's Russell was on the gas from the beginning, grabbing his second consecutive $250 All Balls Racing XC1 Holeshot Award, where he led his teammate Charlie Mullins into the woods on the opening lap. The FMF/KTM duo was followed closely by N-Fab AmPro Yamaha's Jordan Ashburn, along with Factory Husqvarna's Andrew DeLong and Maxxis/KLIM/DirtWise KTM Race Team's Jason Thomas.

Russell steadily increased his gap on Mullins throughout the six-lap competition, where he finished one minute and 47 seconds ahead of Mullins to capture the round seven victory.

The exciting battle came just behind Russell and Mullins as Ashburn and DeLong fought for third all afternoon. The two were later joined by Rocky Mountain ATV*MC/N-Fab AmPro Yamaha's Josh Strang, who didn't get off to a favorable start. The Australian native began just inside the top ten but made quick work to get into the battle for third place. 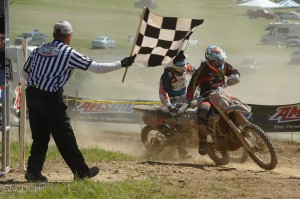 While it seemed like Ashburn had the third place position wrapped up on the final lap, Strang made his move and the N-Fab AmPro Yamaha teammates dueled into the finish line area. Strang edged out Ashburn for third place by less than one second. DeLong wasn't far behind to capture fifth for the day.

Raines Riding University/Atlas Cycles' Ricky Russell took over the points lead in the XC2 Pro Lites Class after capturing his second victory of the season on Sunday. Just as Kailub did in the XC1 Pro Class division, Ricky put forth an impressive ride at the Mountaineer Run, leading the entire three-hour competition from beginning to end.

XC2 Pro Lites rookie Trevor Bollinger made his return to the podium after capturing a second place finish at Round 7. Bollinger grabbed a top five off the start, where he battled with reigning XC2 Champion Grant Baylor all afternoon. Baylor led his fair share of moments throughout the race but Bollinger held strong at the end. Only one second separated Bollinger and Baylor, who finished third for the day and now sits six points down in the championship standings. 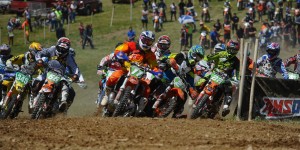 Pennsylvania's Craig DeLong captured another win in the 250 A class, while earning the $125 American Kargo Top Amateur Award with eighteenth overall for the day.

Factory FMF/KTM's Kacy Martinez grabbed yet another win in the WXC Class, followed by Mandi Mastin in second and Sarah Baldwin rounded out the WXC podium with third for the day. 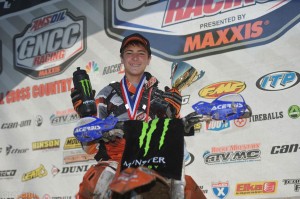 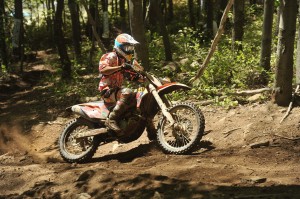 Factory FMF/KTM rider Kailub Russell led wire-to-wire to take the victory at the Mountaineer Run, the seventh round of the GNCC Series. His teammate and current point leader, Charlie Mullins, finished 2nd overall.

The two KTM riders led the pack around the first corner of the 3-hour race with Russell earning the holeshot and Mullins taking the runner-up spot.

"I tried to sprint the first three miles because I wasn't sure who was behind me and wanted to get a gap," stated Russell. "Once I saw it was Charlie (Mullins), I was able to pace myself and then sprinted again once we got into lappers." 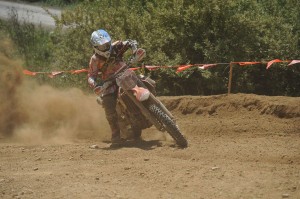 Russell continued, "I had a pretty uneventful day, which was good for a change. My factory services motor got me off to a good start and I was able to lead the whole race to take the win."

Mullins remained close to Russell for the first half of the race before suffering a big crash at the end of the third lap. "I rang my bell pretty hard during that crash and never really recovered. Luckily, I was able to hang on for 2nd place but I was pretty shook up from that spill," stated Mullins.

With the Factory FMF/KTM riders finishing in the top two spots for the day, Mullins will maintain a 7 point lead over Russell heading to the next round. "The next race is in Ohio which is where I grew up. I am looking forward to that event and hopefully getting another win," stated Mullins. 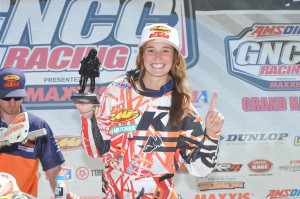 Factory FMF/KTM support rider Grant Baylor secured a 3rd place result in the GNCC XC2 Pro Lites class. He was sitting as high-up as 2nd place near the end of the race before stopping for a second pit stop. He fell to 3rd place on that stop and was unable to make up the time lost in the remaining lap. Now seven rounds into the series, Baylor is ranked 2nd in the standings just 5 points shy of the point leader.

The WXC star, Kacy Martinez, won her sixth race of the season. She took another commanding win over the rest of the field to continue to increase her point lead. She now has a 19 point cushion in the championship chase. 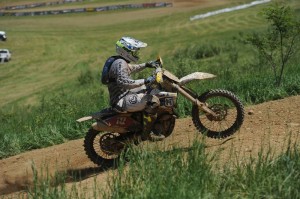 Seventh at the start, DeLong got to work attacking the XC1 Pro class front runners and tightening the gap with each passing lap. Half way through the three-hour sprint he had moved his Husqvarna FE 350 into fourth place and training third placed Jordan Ashburn by less than 30-seconds. DeLong then crashed while passing for position on a tricky downhill section and ceded a place to Josh Strang. Andrew quickly remounted quickly and crossed the finish line at fifth overall in XC1 Pro class. 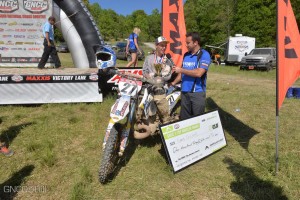 "Andrew charged hard today, showing again that he has what it takes to run with the top riders," offered Husqvarna team manager, Andy Jefferson. "He made progress lap-by-lap and had it not been for his crash, a podium finish was definitely in the cards today. Still his top 5 and scoring points was a plus."

In other action, Andrew's kid brother Craig DeLong posted another in his string of 250-A class wins aboard his 2-stroke 250 Husky. The younger DeLong was celebrated as a GNCC Top Amateur.