Factory FMF/KTM rider Ivan Ramirez took his second win in a row at the Sawmill Canyon 100 to inch closer to the championship point leader at the seventh round of the AMA National Hare & Hound Series.

Temperatures were in the low 80's and made for a perfect day of riding. The bomb run was unusually long at nearly 3 Â½ miles in total length. Luckily, Ramirez had a great jump off the line and pulled the holeshot. His KTM dirt bike led the entire bomb run and he had about a 10 second lead as they started the first of the two 40 mile loops.

The first loop was fast-paced and consisted mainly of grated fire roads. Ramirez was able to pull ahead to a 30 second lead before the first gas and the start of the more technical second loop.

The more challenging loop allowed him to showcase his skill and pull to a 2 minute lead. He rode a mistake-free race to finish over 2 minutes ahead of the next closest competitor to earn his third win of the season. 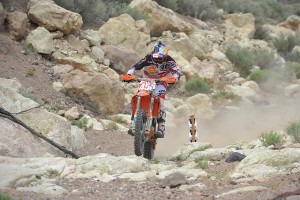 "I had a lot of fun out here today and am excited with my finish," stated Ramirez. "I am so happy to finish on the top step of the podium the last two races and hope to continue to finish here for the remaining rounds."


Nick Burson Puts His Beta On The Podium 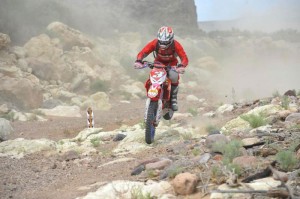 On the west coast, the Beta/Purvines Race Team attended the National Hare and Hound in Caliente, Nevada where dust made racing at the elite speed tough. Nick Burson once again led the team with a third overall finish and put the Beta back on the podium. Burson stills holds the series points lead by 2 points over Ricky Brabec.

Burson describes his push for second overall, "I felt good and started to catch dust but then I clipped a rock and hit the ground pretty well. This took all the wind out of my charge, as I knew we were closing in on the finish. I came down the finish hill and ended up 3rd overall. All in all it was a good day but not where I need to be."

Axel Pearson rounded out the top 5 with fifth overall and comments, "The whole first loop I've ridden most of it in previous races so I could make up time quick in sections but the top 3 were riding really good and with the dust I couldn't make any passes!" Pearson maintained fourth overall until the second loop where a brake pedal issue slowed him down after clipping a rock.

Justin Morrow and Tallon Taylor helped put four Betas in the top fifteen overall with eighth and thirteenth overall finishes, respectively. Round 8 of the AMA National Hare and Hound series continues on August 23rd in Nevada. 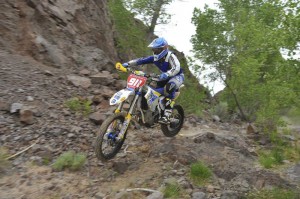 Jacob Argubright took on "The Sawmill Run", Round 7 of the AMA National Hare and Hound series in Caliente, Nevada on his factory Husqvarna and worked hard for his fourth place in the hills of Nevada. Argubright got out to a poor start, and due to the short duration of the race, ran out of time to get his FC 450 on the podium, and had to settle for fourth.

"I got a terrible start and after that, it was just a long day in the dust," Argubright said. "It was super silty the whole day. Through the trees, in the single track it was really bad. I tried to make as many passes as I could, but it was a short race - only two hours."

Jacob made it into the top-five by the end of the first loop, and continued to apply pressure and riders headed into the second loop. He soon found his way into fourth place, but ultimately ran out of time before he could make a run for the podium.