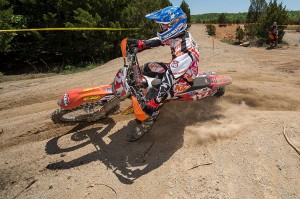 Mullins got the jump on the competition by getting off to a quick start, finishing the opening test one minute and three seconds quicker than Husqvarna Factory Racing's Andrew DeLong. Mullins was fastest in test two, as well, adding another 18 seconds to his advantage over DeLong. Meanwhile, N-Fab/Am Pro Yamaha's Brad Bakken, FMF/KTM's Mike Lafferty and Maxxis/Klim/DirtWise KTM's Jesse Groemm were not far behind.

Mullins lost a bit of his momentum in test three when he missed a turn and followed a rider down the wrong trail, costing both dirt bike riders valuable time. In the meantime, AirGroup Racing's Nick Fahringer finally got untracked after making a few adjustments and posted the fastest time for the third test ahead of DeLong, Bakken and Groemm. Mullins was way down in fifth thanks to his navigation error.

Test four was no better for Mullins as he saw his lead start to slip away due to a rear brake issue. The defending series champ was forced to ride the entire nine-mile test with only his front brake and was once again fifth fastest, with Fahringer getting his second test win of the day ahead of Groemm, Bakken and DeLong. 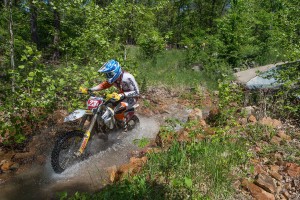 With DeLong and Fahringer breathing down his neck, Mullins got his house in order in the final two tests, posting his third and fourth test wins of the day. When all was said and done, Mullins took the win by a minute and 33 seconds over Fahringer; with DeLong rounding out the podium another 29 seconds back.

"This was a hard day, but all in all it was a good one," said Mullins. "This was the toughest enduro I've done in a long time. There was a lot of single-track and it was tight and rocky and it's good to win one like this."

Remarkably, Bakken finished third in all six tests but still ended the day in fourth overall. Meanwhile, Groemm rounded out the top five despite struggling in the final test.

American Beta rider Cory Buttrick had his best finish of the year with a sixth, 39 seconds better than KTM support rider Grant Baylor. 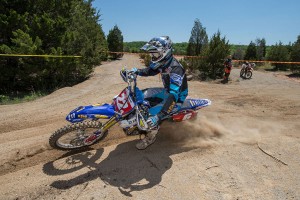 Eight-time national enduro champ Mike Lafferty finished eighth overall, beating out his nephew Ryder Lafferty by over a minute. Before the race, the Missouri Mudders awarded Mike Lafferty with the "King of the Lead Belt" award, for winning five of his previous eight starts in the event.

Finishing 10th was Husqvarna-backed Craig DeLong, who is the younger brother of Andrew DeLong.

With four rounds in the books and six remaining on the schedule, Mullins sits 40 points ahead of Fahringer in the series standings, with Groemm in third another seven points back.

In addition to 10th overall, Craig DeLong also ran away with the win in the Rekluse AA-Expert class, winning all six tests and finishing six minutes and two seconds ahead of runner-up finisher Drew Higgins.

"The first tests were fast and really suited my style so I was able to build up a pretty good lead in the beginning," said DeLong. "Once I had the lead, I was able to just ride a steady pace and make sure I stayed on two wheels." 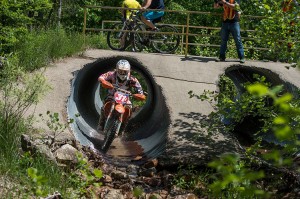 After four rounds, Higgins leads the Rekluse AA-Expert class standings with 79 points, followed by Tyler Trammel with 78 and DeLong with 76.

Brad Myers, who finished 10th the 50+ A class, used KR4's Arrive-n-Ride program to compete in the Lead Belt Enduro and was pleased with the service.

"Everything was here and ready for me when I got here," said Myer. "It made riding the event hassle-free and relaxing."

The Kenda AMA National Enduro Series resumes action on June 1st with round number five of the series in Arrington, Virginia. 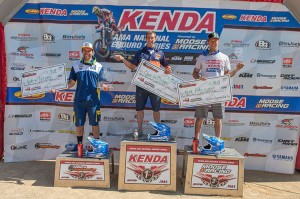 Mullins got off to a great start taking a commanding test win in the opening section. He followed that victory with another first place test score in the second test section. On the third section, Mullins got turned around on the trail and lost some time finishing the section with the fifth fastest time. On the fourth section, he encountered a rear brake problem and turned another fifth place time.

With two tests to go, Mullins returned to his winning ways and earned the fastest section time in both tests. At the end of the six tests, he took the victory by more than a minute and thirty seconds over the next closest competitor.

"I'm really excited with how I am riding at the National Enduros this year," stated Mullins. "The course was pretty rocky today but I enjoyed it and I am glad to gain another win."

His teammate, Grant Baylor, finished just outside the top five in each test section and earned 7th overall. Eight-time National Enduro Champion, Mike Lafferty, finished 8th overall. Lafferty started strong but suffered a hard crash in the third test which cost him a lot of time and shook him up for the remainder of the race. The final member of the Factory FMF/KTM Team, Steward Baylor, did not race this round as he is still out healing from a concussion injury suffered earlier this year.

Now four rounds into the series, Mullins holds a 40 point lead in the championship point standings. 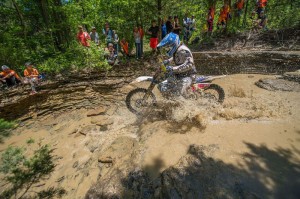 Factory Husqvarna's Andrew DeLong carded a third-place finish at the Lead Belt National Enduro this weekend where rain on Wednesday and Thursday provided perfect conditions at the Park Hills venue in Missouri.

DeLong shared the podium with fellow Husqvarna rider Nick Fahringer, who finished second place overall. A third Husqvarna and another DeLong celebrated a big win at the event - Craig DeLong was impressive on his way to the AA-Expert overall win and 10th overall.

"It was an absolutely beautiful place for a race," commented Husqvarna Racing Manager Andy Jefferson. "I'm really happy with the way Andrew was riding today; he's really starting to put it together."

Andrew ran in a strong second place for the first half of the day, and held a nine-second lead over Fahringer going into the fourth test. Unfortunately that is where the small mistakes started taking their toll on Andrew. A crash in tests four and five saw him slip to third overall, but he minimized the damage and managed to end the day with his FE 350 on the podium.

"It was great to see two Husqvarnas on the podium today," Jefferson continued. "Nick and Andrew both rode very well - congratulations to Nick Fahringer and the AirGroup Racing Husqvarna team. We still have a lot of racing left to go this year, and we're looking to keep this momentum going." 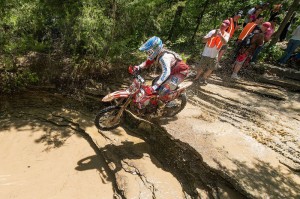 Park Hills, Missouri welcomed Beta USA's Cory Buttrick and Justin Sode for Round 4 of the National Enduros. Both team riders had season best finishes on a technical, rocky course that traversed a little over 65 miles. Sand washes, rock ledges, and loose rocky trails made it difficult to stay on two wheels and remain consistent throughout the day.

Cory Buttrick continues to improve in his returning year by logging the fourth fastest time in test six. Despite a hard crash knocking the wind out of Buttrick in the fourth test, he regrouped to finish an impressive sixth overall. Buttrick goes on to say, "We had a pretty good day and a step in the right direction. Besides losing the trail and a crash in section 4, the day went well. My Beta 300RR handled well in the slick, rocky conditions. Now, I'm looking forward to the Virginia National Enduro. We will continue to test and improve to have a better finish."

Buttrick's Beta teammate, Justin Sode, also stepped up his performance with a 12th overall finish; running consistent 11th overall test times. Sode comments, "Conditions at Round 4 of the National Enduro Series were perfect. My Beta 250RR performed amazingly. I had a slow beginning of the race but throughout the day I picked up the pace. I'm happy with my result but hope to improve at Round 5."

After four rounds, Buttrick sits 9th in points while Sode sits in 15th. Round 5 of the National Enduro Series resumes in two weeks in Virginia.