Chaparral Motorsports
|
May 15, 2014
Two more committees, House yet to weigh in 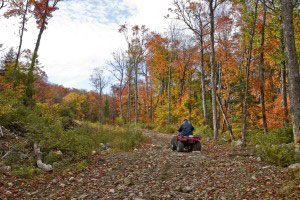 The Recreational Trails Program is an $85 million initiative that funds motorized recreational trails. The program is funded by the excise tax that off-highway-vehicle users pay when purchasing fuel for their vehicles.

The RTP was also included in the administration's transportation proposal, the GROW America Act.

"We are very happy to see the RTP included in the Senate bill," said Wayne Allard, AMA vice president of government relations. "But we recognize that this represents just one step in the approval process. And, it is only one of the many proposals we would like to see included in the final bill."

In addition to reauthorizing the RTP, the AMA seeks an end to federal funding of motorcycle-only checkpoints; measures that ensure anti-distracted driving provisions are implemented; language that includes motorcyclists in vehicle-to-vehicle communication studies; and formal recognition of the benefits of riding a motorcycle.

"We hope that the Senate Commerce Committee and the Committee on Banking, Housing and Urban Affairs, as well as the House of Representatives, also recognize the importance of all of these measures to the future of motorcycling," Allard said. "We look forward to working with the committees to ensure the motorcycling community's priorities are met," Allard said.

The AMA thanks Sens. Boxer, David Vitter (R-La.), Tom Carper (D-Del.) and John Barrasso (R-Wyo.) for their work on the Senate bill.