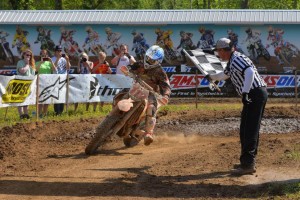 The 2014 AMSOIL Grand National Cross Country Series presented by Maxxis, an AMA National Championship, made its return to the Loretta Lynn Ranch in Hurricane Mills, Tennessee for the 33rd running of the Parts Unlimited Loretta Lynn's GNCC. After just less than three hours of racing through the rough and rocky 11-mile course, it was Charlie Mullins who prevailed with his second consecutive victory of the season.

Sunday's Round 6 began with dry and sunny conditions but things quickly switched gears as a big rain storm let loose just one hour before the start of the afternoon race. Along with the wet and slippery conditions on the racetrack, came hot and humid temperatures to add yet another variable into the mix.

As the green flag dropped, it was Factory FMF/KTM's Kailub Russell who shot off the start to claim the $250 All Balls Racing XC1 Holeshot Award. However, Russell bobbled in the slick first turn and his teammate Charlie Mullins took over the early lead on lap one.

Russell reclaimed his lead on the same lap but it didn't last for long as the reigning champion had to make an unexpected stop in the woods to change out a set of goggles. As a result, Russell fell back to fourth place, where Rocky Mountain ATV*MC/N-Fab AmPro Yamaha's Josh Strang and Maxxis/KLIM/DirtWise KTM Race Team's Jason Thomas moved into the second and third place positions. 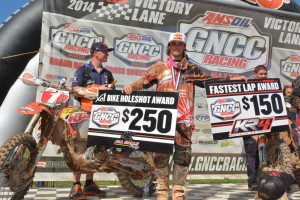 From there, Russell and Mullins took turns leading different parts of the six-lap race. Heading into the final lap, the Factory FMF/KTM duo was evenly matched and both riders were prepared for a head-to-head battle to the very end. Russell stopped in his pits to get a splash of gas and that's when Mullins capitalized to close the gap that Russell had gained late in the race. From there, the front-runners diced it out for the lead position.

"On the last lap I made a little mistake and Charlie got around me," Russell said. "We battled pretty hard the next couple of corners, banging bars pretty hard and fighting for the first place position. I kind of got rebounded out of a rut and it sent me to the ground. I put on a hard charge to catch up but the damage was done."

Mullins held off Russell in the final moments of the dirt bike race to capture his second straight victory of the season, finishing just six seconds ahead of the second place finisher of Russell, where he now holds a 12-point lead over Russell heading to Round 7 in two weeks.

"I definitely had to work for this one," Mullins said. "That last lap we got pretty close and it was everything I had. It feels good to get a win but it's far from over. We've got the tough rounds coming up so I definitely need to stay on my game and get ready for the rocks in West Virginia." 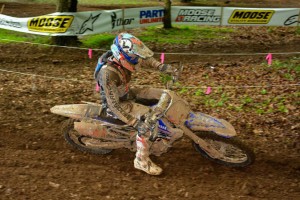 Russell once again pulled the $100 KR4 Performance Fastest Lap, this time on lap five of racing. Mullins came less than one second away from earning this honor.

Strang put forth a solid performance at the Parts Unlimited Loretta Lynn's GNCC, where he began the afternoon in a favorable second place position. From there, Strang stuck by himself in the third place position for a majority of the afternoon as he maintained a comfortable gap over JCR Honda's Chris Bach in fourth. Strang made a big push at the end, where he nearly exhausted himself after almost three hours of racing.

"It was a tough day today the heat and humidity played a toll on all of us. I'll take third today, considering last round's results," Strang commented.

After riding inside the top five all afternoon, Bach scored an impressive fourth place overall, his best of the season, at the sixth round. 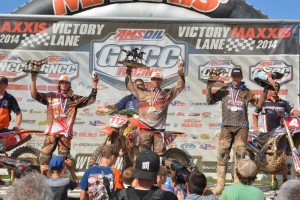 It was yet another shakeup in XC2 Pro Lites point standings as KTM Support rider Grant Baylor captured a big win on Sunday to reclaim the points lead after six rounds. Raines Riding University/Atlas Cycles' Ricky Russell rode hard all afternoon but it wasn't enough to stop the reigning XC2 champ this time, as he finished second place in the class.

By the mid-way point, Maxxis/KLIM/DirtWise KTM Race Team's Jesse Groemm had put himself into a favorable position for a podium finish. However, RideMPS.com/AMSOIL Honda's Layne Michael joined Groemm in battle with less than one mile to go from the finish. Michael put a spectacular last-minute pass on Groemm in the motocross track, where the West Virginia native captured a podium finish in he XC2 Pro Lites class. Groemm took fourth and Imperium Bicycles' Chris Douglas rounded out the top five. 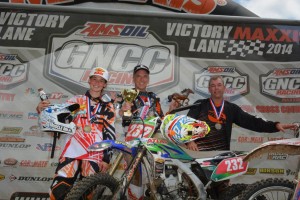 Pennsylvania's Craig DeLong captured another win in the 250 A class, while earning the $125 American Kargo Top Amateur Award with thirteenth overall for the day.

Factory FMF/KTM's Kacy Martinez grabbed yet another win in the WXC Class, as well as second overall for the day. Sarah Baldwin made her return to the WXC podium this season with a second place in the class, while N-Fab AmPro Yamaha's Jessica Patterson finished third in the class.

In the 8 a.m. Youth race, South Carolina's Cole Mattison secured his third consecutive victory at Round 6, grabbing yet another Super Mini (14-15) class win along the way. Tennessee's Sam Thurman captured a second place finish in front of his home state crowd, while Alabama's Kyler Godwin rounded out the overall podium with third place in the Super Mini (14-15) class.

The 2014 AMSOIL Grand National Cross Country Series resumes May 24 and 25 with the Mountaineer Run GNCC in Masontown, West Virginia. For more information on the series, visit www.gnccracing.com. 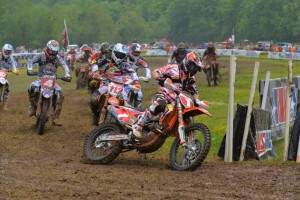 Factory FMF/KTM rider Charlie Mullins took a hard fought win against his teammate Kailub Russell at the sixth round of the GNCC Racing Series held at Loretta Lynn's Ranch. Joining Mullins at the top of the podium were his teammates Grant Baylor and Kacy Martinez taking the victories in the XC2 Pro Lites and WXC classes.

Weather was the biggest factor in the sixth round of the series as riders were faced with warm temperatures and high humidity. Hard rainfall dropped immediately prior to the start of the afternoon races which allowed for no dust during the race but a very slippery race course. The riders raced an 11.5 mile rocky loop for six total laps.

For the first time this season, Russell pulled the holeshot followed closely by his teammate Mullins off the start of the XC1 Pro line. The two riders immediately began a battle that would last the next three hours. Russell led the race until mile eight where he stopped to get goggles. This quick stop dropped him to 5th place. By the end of the second lap, Russell was able to catch back up to 2nd place behind Mullins. On that same lap, both riders came into the pits for goggles and Russell decided to refuel. 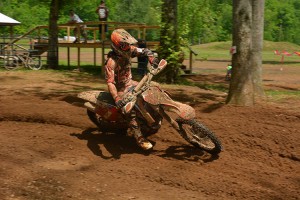 At the end of the third lap, Mullins stopped for gas which allowed Russell to get out front and pull a 16 second gap on Mullins. A few miles into that lap, Russell suffered a crash which allowed Mullins to close the gap. With two laps to go, only 10 seconds separated the teammates. On the final lap, Russell had to stop for a splash of gas which allowed Mullins to close within 5 seconds of him. Around the 8 mile marker of the final lap, Mullins was able to challenge Russell for the lead and made a pass to take over the top spot. Russell fell as a result of the contact made during the pass and lost a few seconds to Mullins. At the end of the race, Mullins took his third win of the season by a 6 second victory over Russell.

"It was a tough battle today," stated Mullins. "Kailub (Russell) rode a strong race as he always does and we battled the whole time. I am happy to get a win here and gain a few more points toward the championship."

Steward Baylor had a day he would like to forget in the XC1 Pro class. He started the race in the bottom ten, but got dizzy as a result of a concussion suffered at the third round of the series. The team decided it was best for him to pull off and seek medical attention. Baylor will be evaluated this week and it will be determined if he will need to sit out any remaining rounds to recover. 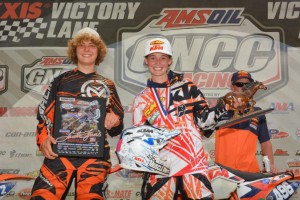 In the XC2 Pro Lites class, Grant Baylor had an 8th place start off the line. He quickly moved up to 3rd place by the end of the first lap. On the second lap he was able to make a pass for the lead and never looked back. He went on to lead the remaining laps and took the win by 37 seconds over the 2nd place ride of Ricky Russell. Baylor now holds the points lead heading to the next round.

In the WXC class, Martinez came out first around the opening corner and never lost her lead position. She led all four laps of the race to take her fifth win of the series over fellow KTM rider Sarah Baldwin. She now holds an 18 point lead in the championship standings. 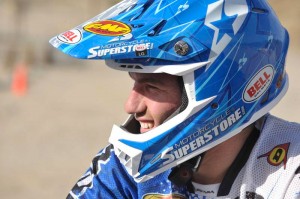 Team Husqvarna's Andrew DeLong wrapped up another solid day of GNCC competition at the world famous Loretta Lynn's Ranch this weekend with a sixth place overall finish aboard his Husqvarna FE 350.

"Today Andrew rode smart and let the race come to him," said Husqvarna team manager, Andy Jefferson. "His FE 350 was perfect and running well and changes we made to his suspension really paid off. Week by week our program is improving and Andrew is becoming more confident."

Hard driving rain at the beginning of the race flooded the course making conditions slick and challenging for all competitors. DeLong got off the starting line in the top ten and throughout the 3-hour sprint he traded positions with a trio of top riders. He ran in fourth place for a time during the race and a four-rider pack battled it out right to the flag within a margin of 7-seconds in the final lap.