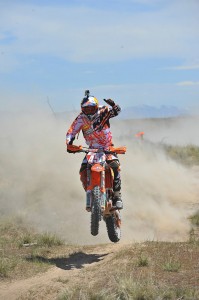 Factory FMF/KTM rider Ivan Ramirez took his second win of the 2014 AMA National Hare & Hound season at the sixth round of the series held at the Little Sahara OHV Park.

Ramirez had a great jump off the line and came out at the end of the long bomb run with a 7 second lead over the rest of the pack. He continued to pull away out front and had over a minute and a half lead as the riders hit the 38 mile marker.

Throughout the 100 mile race, Ramirez pit his KTM dirt bike for fuel three times and had a mistake-free ride. He crossed the finish line to take the victory with a nearly five minute lead over the 2nd place ride of Ricky Brabec.

"I am really excited to finish with a win," stated Ramirez. "I have had a few disappointing results at the last few rounds and I am happy to get another win and gain some valuable points in the championship standings."