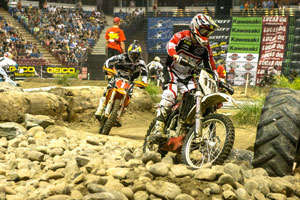 Kenda tire announced today its return as the official motorcycle tire of the GEICO AMA EnduroCross Championship, fueled by Monster Energy and presented by Lucas Oil for 2014. The exciting announcement comes alongside news that EnduroCross championship contenders Cory Graffunder and Kyle Redmond will be racing on Kenda tires exclusively throughout the 2014 season.

Kenda enters 2014 as a seven-year supporter of EnduroCross and continues to be a key factor in the sport's rapid growth and increased popularity with the mainstream motorcycle crowd. With AMA EnduroCross entering its eighth season as a multi-round, championship series, Kenda looks forward to another year of intense racing action in front of the best fans in all of motorcycling.

"Kenda is proud to be the Official Tire of the EnduroCross series once again," Gus Niewenhous, Motorcycle Marketing Manager for American Kenda, said. "We continue to believe the variable race conditions, talented riders and hardcore fan base of real motorcyclists present at each EnduroCross round is the absolute perfect showcase for Kenda and our full line of high-performance tires.

"For 2014, Kenda is exceptionally excited to welcome EnduroCross front runners Cory Graffunder and Kyle Redmond to the team. Graffunder and Redmond will be using Kenda tires exclusively during the entire 2014 season. The intense proving grounds of EnduroCross will accelerate our development of the next generation of Kenda products. Fans can look for announcements on new products soon." 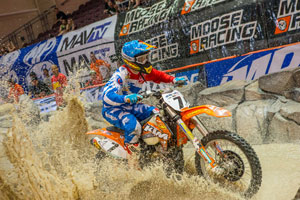 Kenda's increased investment in EnduroCross comes as the series shifts into overdrive-increasing its race count to nine cities, including two new cities/venues, for 2014.

"Kenda is a top-level supporter of EnduroCross and, as the Official Tire, truly reflects the competitive spirit and innovation the top racers show each race weekend," said Lance Bryson, Director of Sales and Marketing for EnduroCross. "Cory Graffunder and Kyle Redmond are excellent racer-ambassadors for the Kenda brand and we are proud to have the Kenda team coming strong into the 2014 season."

The Lucas Oil Productions team will again be producing one hour shows for the eight AMA EnduroCross events that will air on MAVtv. Check out www.MAVtv.com for more information.

Las Vegas will host the opening round of EnduroCross on Friday, May 2, during the Monster Energy Supercross finals weekend. Atlanta, Georgia and Salt Lake City, Utah will host first ever EnduroCross events in 2014 and the X Games Enduro X event in Austin, Texas, also will be included as a points-paying event for the GEICO AMA EnduroCross championship. The traditional EnduroCross finals in November will now be held Nov. 22 in Ontario, California.


About EnduroCross:
EnduroCross tracks incorporate various elements of extreme off road racing into a Supercross-style setting, including rocks, boulders, logs, sand, mud, a water-hole...and even a few special obstacles like giant tires thrown in! Known as the "toughest racing on two wheels," this indoor off road racing will certainly keep you on your feet. Be sure to log-on to www.mavtv.com/shows/endurocross for local air dates/times.