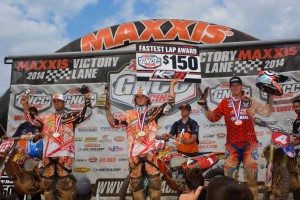 Round 4 of the 2014 AMSOIL Grand National Cross Country Series presented by Maxxis, an AMA National Championship, presented some of the most favorable weather conditions of the season with sunny skies and temperatures nearing the 80-degree mark. While the South Carolina temperatures were a welcomed change for spectators on Sunday, the track conditions were nothing short of brutal for the racers competing in the 18th Annual VP Racing Fuels Big Buck GNCC in Union County.

Factory FMF/KTM's Kailub Russell extended his winning streak to three-in-a-row at the fourth stop of the 13-round series, topping his teammate and closest competitor Charlie Mullins by approximately one minute in the end. However, like his other two wins this season, Russell had to work for this one.

N-Fab AmPro Yamaha's Paul Whibley secured the $250 All Balls Racing XC1 Holeshot Award, while his teammate Jordan Ashburn grabbed the lead on the opening lap. While the rest of the pack was rounding the second corner, Russell was just getting through the start straight after another rider went down in front of him. From there, Russell charged his way through the pack, eventually taking over the lead from Mullins on Lap 3. Russell's quick pace was enough to earn the $150 KR4 Performance Fastest Lap once again. 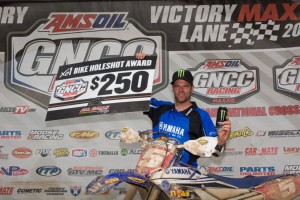 "I was about 30 seconds down from Charlie's lead and it was tough to make moves real fast and get around those guys quick so I just chose good lines. I knew that if I could catch him [Mullins] I was going to win," Russell said.

Mullins kept the pressure on Russell throughout much of the race, but a couple of mistakes cost him a substantial amount of time in the final laps of the three-hour race.

"I clipped a lapper and ended up hitting a tree and hitting my hand pretty good," Mullins said. "The last few laps were pretty tough but I just did the best I could and didn't really make up any time." 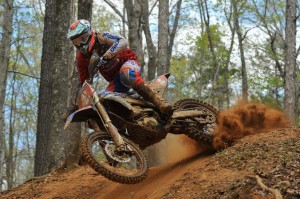 Russell's Round 4 victory will give the reigning champ the overall points lead and white number plate background for the first time this season, with only a two point advantage over Mullins heading into the fifth round.

Rocky Mountain ATV*MC/N-Fab AmPro Yamaha's Josh Strang ran into issues firing his bike up on the start, where he immediately tucked in behind Russell on the opening lap. Strang made his way into the third place position and set his sights on Mullins for second place. Just as he reeled the KTM duo in, Strang had a crash that set him back a little further. Despite a valiant effort on the final lap, Strang wasn't able to catch the leaders in time for the checkered flag.

"I caught Charlie and he picked up the pace and I couldn't hang there at the end of the race," Strang said. "I used a little more energy trying to catch those guys. I wanted to give it a go and I nearly did at the end but once I had that crash I was pretty much done." 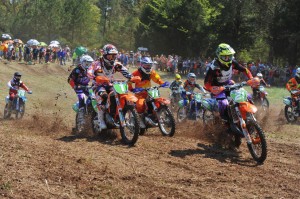 Factory Husqvarna's Andrew Delong put forth the best ride of his XC1 Pro Class rookie season in South Carolina. Delong didn't get the best start but the former XC2 Pro Lites standout put himself inside the top five soon enough, where he locked in the fourth place position. N-Fab AmPro Yamaha's Paul Whibley finished in fifth after an impressive come-from-behind charge, while his teammate Jordan Ashburn followed in sixth.

It was a tough day for the Honda-backed rides of RideMPS.com/AMSOIL/Honda's Thad DuVall and Johnny Campbell Racing (JCR) Honda's Chris Bach, who both succumbed to the vicious conditions out on the course. Both riders spent some time in their pit areas making suspension adjustments, but neither was able to score championship points at Round 4. 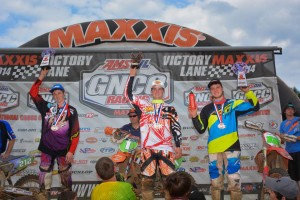 The XC2 Pro Lites championship battled heated up as reigning champ Grant Baylor took over the points lead with a big win in his home state. It wasn't Baylor's from the beginning, though, as Raines Riding University/Yamaha-backed Ricky Russell led five of the six laps out there. Russell experienced a crash on the final lap that allowed Baylor to move by for the win.

Russell held on to finish second, while North Carolina's Trevor Bollinger, Round 3 XC2 winner, rounded out the class podium with a third place finish. 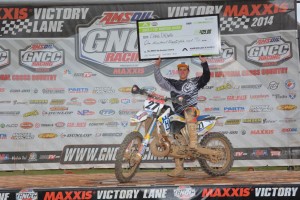 Pennsylvania's Craig Delong grabbed the $125 American Kargo Top Amateur Award with sixteenth overall for the day, while also topping the 250 A Class.

Master's A (50+) winner Vance Earl earned his first Amateur Overall victory of the season, where he was joined by the Master's A runner-up Michael Crane with second place overall. Super Senior A (45+) Class' Rick Matteson rounded out the overall podium with yet another class win. 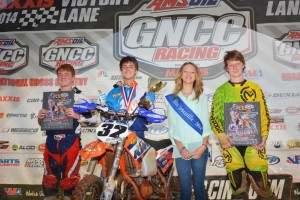 In the 8 a.m. Youth race, the Super Mini (14-15) riders once again dominated the overall podium. South Carolina's very own Cole Mattison captured his first overall victory of the season, with Tennessee's Sam Thurman in second and Alabama's Kyler Godwin rounded out the podium.

The 2014 AMSOIL Grand National Cross Country Series resumes April 26 and 27 with the Dunlop Limestone 100 in Springville, Ind. For more information on the series, visit www.gnccracing.com. 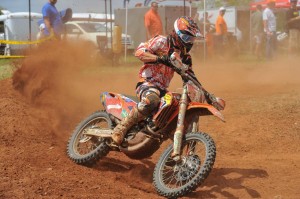 Factory FMF/KTM rider Kailub Russell took his third win in a row in the GNCC XC1 Pro class at the fourth round of the GNCC Series while KTM Factory support rider Grant Baylor secured a victory in the XC2 Pro Lites class.

For the first time this season, the weather was very warm and the GNCC course was dry and dusty. Large tree roots and square-edged bumps were the challenge for the riders during the six-lap, three-hour race. Off the start of the pro race, it was Factory FMF/KTM riders Charlie Mullins and Steward Baylor who had the best jump off the line sitting inside the top five. Russell also had a good jump but came together with another rider in the first corner and got tangled in the turn. He recovered at the back of the pack and set to work to pick off riders through the dusty conditions. 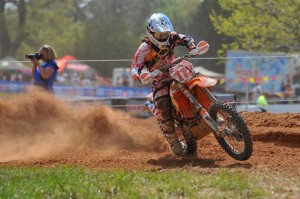 Russell took the lead from Mullins on the third lap of the race and battled with his teammate until the pit stop. Both riders came in simultaneously to fuel and returned back to the track in the top two positions. Shortly after, Russell began to pull ahead of Mullins and was able to gain a lead on his teammate. At the end of the six lap race, he was able to take the win by 1 minute over Mullins who hung on for 2nd place. Steward Baylor struggled with a sore wrist from the rough track and ended up 8th overall for the day.

In the XC2 Pro Lites class, Grant Baylor earned a 3rd place start off the line. He lost some positions on the second lap of the race when he had to stop for fuel. From that point on, he turned up the speed and was able to start making passes toward the front of the pack. On the final lap he had moved within 10 seconds of the lead rider. He pushed hard and was able to get around the rider and take over the lead and capture the XC2 Pro Lites win. Now four rounds into the series, Baylor holds the XC2 Pro Lites points lead by 3 points.

Factory FMF/KTM rider Kacy Martinez, who has won the past three WXC races, settled for 2nd place at the fourth round of the series. Martinez earned a top three start and led the first two laps of the race. On the third lap, Martinez and Jessica Patterson were battling for the lead when they made contact which caused Martinez to suffer a crash. She quickly recovered from the crash but was unable to catch back up to Patterson and she finished the race in 2nd place. 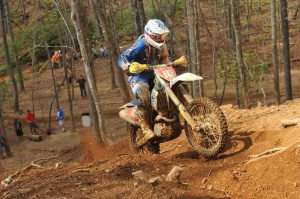 Andrew DeLong's #10 FE 350 was the first Husqvarna across the line in fourth place at the Big Buck GNCC. He delivered a composed and cool ride under pressure through the challenging course that is famous for tight wooded trails, creek crossings and long rocky climbs.

"Andrew had a good ride today. He got off the start in seventh, moved up to fourth and held it there until the end. His bike setup seems right and this type of terrain suits his riding style." Said Husqvarna team manager, Andy Jefferson. "I'm happy with his performance."

Also racing this weekend at the Big Buck was DeLong's teammate Mike Brown who used this GNCC round as a training day for the upcoming AMA Endurocross season opener at Las Vegas. "Brownie" and his FE 350 took an 11th place XC1 Pro finish.

A tip of the helmet also to Andrew's younger brother Craig DeLong who captured the A-Class win aboard a Husqvarna TC 250 two-stroke.