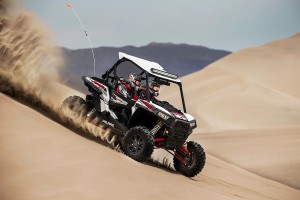 Off road or Off Highway Vehicle (OHV) enthusiasts have a big reason to celebrate this week, about 40,000 acres worth of celebrating actually, as a large section of the Imperial Sand Dunes Recreation Area-AKA Glamis-that had been off limits will open up this coming fall.

For 14 years sections of the dunes had been closed in an effort to protect an herb called the Peirson's Milk-vetch, which was listed as threatened under the federal Endangered Species Act. Last week U.S. District Judge Susan Illston of the Northern District Court of California in San Francisco upheld the U.S. Bureau of Land Management's plan to remove most of the milk-vetch closure, opening a large swath of sand right in the middle of the rec area.

The Glamis Sand Dunes are a top destination for ATV, UTV, and dirt bike enthusiasts attracting riders from not only all over Southern California but from across the country as well. While certain areas will still be closed, the opening of these 40,000 acres will give visitors nearly 130,000 acres to explore-ideal for the larger and more powerful Side x Sides like the Polaris RZR XP 4 1000 and Arctic Cat Wildcat 4X.