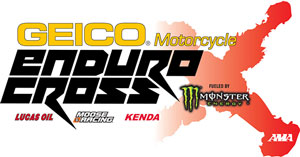 The GEICO AMA EnduroCross series, fueled by Monster Energy and presented by Lucas Oil is ramping up for its eleventh season of the most exciting indoor off-road racing. With two new venues joining the schedule this year, it is shaping up to be the most exciting season yet.

The Gwinnett Center, just outside of Atlanta, GA will provide a heavily requested East Coast swing for the series and Energy Solutions Arena in Salt Lake City, UT is also officially on the schedule for the first time. EndurocCross will now be showcased in nine cities (up from seven in 2013). 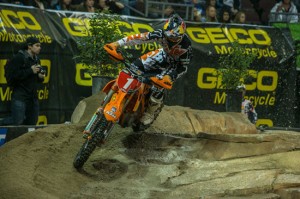 Las Vegas will again host the opening round coming up on Friday, May 2nd during the Monster Energy Supercross finals weekend. The traditional EnduroCross finals in November will now be held in Ontario, California on November 22nd. The X Games Enduro X event in Austin, Texas will also be included as a points paying event for the GEICO AMA EnduroCross championship.

The 2013 championship came down to the last round in a winner-take-all battle between KTM's Taddy Blazusiak and Mike Brown. Blazusiak took the title leaving Brown more determined than ever to earn his first EnduroCross championship in 2014 aboard his new Husqvarna factory ride. Don't forget Beta's Cody Webb - the factory rider won the Vegas final, his third of the season, serving notice that he will be a force to be reckoned with in 2014.


About EnduroCross:
EnduroCross tracks incorporate various elements of extreme off road racing into a Supercross-style setting, including rocks, boulders, logs, sand, mud, a water-hole...and even a few special obstacles like giant tires thrown in! Known as the "toughest racing on two wheels," this indoor off road racing will certainly keep you on your feet. Be sure to log-on to www.mavtv.com/shows/endurocross for local air dates/times.