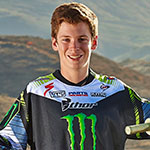 "This setback is very disappointing," said Cianciarulo. "We had a great start to the Supercross season and I wanted to win a championship for my Monster Energy/Pro Circuit/Kawasaki team. As much as I would love to tough it out like I did last weekend, the people around me and I feel this is the best decision to fix my shoulder for good. I know I will come back stronger and ready to compete as soon as I can."

The 17-year-old Cianciarulo made a spectacular Monster Energy Supercross debut, winning his first race on the Monster Energy/Pro Circuit/Kawasaki KX250F. His prolific start ranks as one of the best of all-time as he scored three wins and five podiums in his first five Supercross starts. Cianciarulo injured his shoulder on Saturday in Toronto and was forced to pull off after completing three laps of the main event.