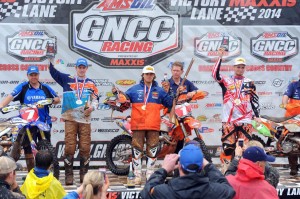 Following a dry and sunny day of ATV racing on Saturday, Round 2 of the 2014 AMSOIL Grand National Cross Country Series presented by Maxxis, an AMA National Championship, resumed on Sunday with the motorcycle portion of the weekend. Heavy rainfall infiltrated the grounds of Aonia Pass MX Park in Washington, Ga., creating extreme conditions for the pro race. Reigning champion Kailub Russell emerged victorious after battling it out for the overall lead with defending XC2 Pro Lites Champion Grant Baylor in the final moments of the race.

Russell wasn't out front for most of the race, but the Factory/FMF/KTM rider pulled it together in the end to secure the overall win to gain thirty points towards the championship chase. It wasn't without a fight from his KTM teammate and XC2 Pro Lites rider Grant Baylor, who quickly joined the overall battle on adjusted time. Since the second row takes off approximately one minute behind the XC1 Class, perhaps Baylor had an advantage in making his way through the pack.

"Last night I was hoping it would hit us hard with the rain because I was looking forward to a mud race," Russell said. "We changed some things on the bike and it worked out because got some points on Charlie," Russell said.

Before the 1 p.m. race began, the GNCC Course Marshalls decided that the race would be shortened to a minimum of two hours due to the heavy rainfall throughout the day. With the leader coming in at 2:17:54, Sunday's race was just short of a typical three-hour GNCC. 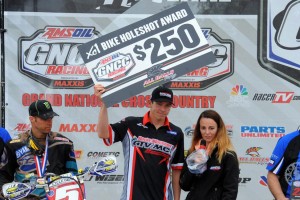 Rocky Mountain ATV/MC's Josh Strang grabbed yet another $250 All Balls Racing XC1 Holeshot Award with his AmPro Yamaha teammates Paul Whibley and Jordan Ashburn close behind. It didn't take long for guys like Factory FMF/KTM's Charlie Mullins and the XC2 front-runners of Grant Baylor and Maxxis/KLIM/DirtWise KTM Race Team's Rory Mead to join the Yamaha riders in the lead battle, where a chaotic chain of events unfolded until the end.

It was Russell who held strong in the final moments, where he laid down his fastest lap of the day on Lap 5 with a 26:59.7. For that, Russell took home an extra $150 with the KR4 Performance Fastest Lap Award en route to his first win of the season.

"You know, I put myself into these positions where I have to win and I just have to dig deep and keep plugging away to get that points lead," Russell added.

Despite a valiant effort from the second row, Grant Baylor missed the overall victory by only four seconds after time adjustment. 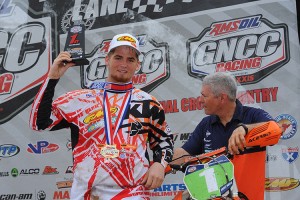 "I was definitely going after the overall and I'm upset I didn't get it but it was a good points ride today," said the XC2 winner. "The last three laps I didn't have any brakes at all and then I got stuck a few times on the last lap so I lost that minute for the overall but I'll just have to come back and get it next time."

Ashburn put himself into podium contention right away as he latched onto the lead pack on the opening lap. Ashburn showed his strength in the tough conditions, moving up to the second place position just after the halfway mark. Although Baylor finished ahead of Ashburn in the overall, the Tennessee native took second place in the XC1 Class, finishing less than one minute behind Russell, and third overall for the day.

"I had a pretty good day, just tried to pick good lines and run my own race," Ashburn said. "It feels really good to be back on the podium again. I'm just looking forward to see what the rest of the year has in store."

Whibley came in for fourth overall just six seconds behind his teammate Ashburn, while Strang captured fifth overall for the day. 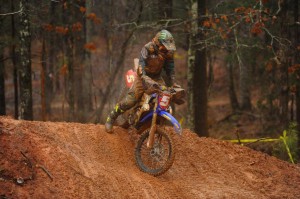 "Today was really good," Whibley said. "I had no idea what was going on out there, I guess I was leading at some point. It's one of those days where you have to just keep going, survive and have fun."

While it wasn't ideal for the Round 1 winner, Mullins finished sixth overall to salvage points and maintain the lead after two rounds of dirt bike racing.

It was a tough fay for both the Factory Husqvarna ride of Andrew Delong and RideMPS.com/AMSOIL/Honda's Thad DuVall, as both riders experienced mechanical issues early in the race. DuVall was able to complete one of five laps, while Delong's day was over before the first lap was complete. 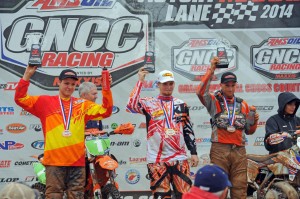 The XC2 Pro Lites Class saw a second unique winner in two rounds as the Reigning XC2 Champion Grant Baylor topped the field with an impressive ride from the second row.

KR4 Performance's Shane Hufford grabbed the $100 DigitalOffroad.com XC2 Holeshot Award before dropping back to the fourth place position. Maxxis/KLIM/DirtWise KTM Race Team's Rory Mead took the early lead where he and Baylor hooked up and pushed their way through the overall pack. The duo flip-flopped the lead several times but Baylor eventually broke away. Mead settled into the second place position and maintained a conservative pace into the finish.

XC2 Pro Lites rookie Trevor Bollinger kept himself within the top five all afternoon and the consistency paid off as riders such as Maxxis/KLIM/DirtWise KTM Race Team's Jesse Groemm ran into issues near the end. Bollinger capitalized on the opportunity to get by and rode his way to an XC2 podium finish and tenth overall for the day.

Alabama's Cliff Ousley put forth an outstanding ride from the Open A Class, earning the $125 American Kargo Top Amateur Award with thirteenth overall, as well as the Open A Class victory. 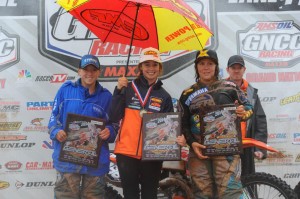 It was a Super Senior A (45+) sweep on the 10 a.m. podium as Greg Elrod captured the overall victory in the one and a half-hour competition. Elrod was joined on the overall podium by fellow Super Senior A competitors Rick Matteson and Stephen Thaxton.

In the 8 a.m. Youth race, Tennessee's Super Mini (14-15) Class winner Sam Thurman captured the overall victory despite the muddy conditions and heavy rainfall on Sunday morning. Alabama's Kyler Godwin made his second podium appearance in two races after capturing second overall for the day and runner up in the Super Mini (14-15) Class. Kentucky's Daniel Spurgeon put in a solid ride to earn the Super Mini (12-13) victory, as well as third place overall for the day. 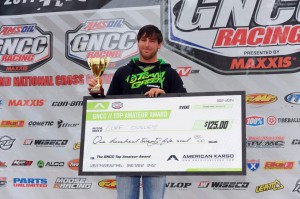 
About GNCC Racing
The AMSOIL Grand National Cross Country series presented by Maxxis is America's premier off-road racing series. Founded in 1975, the 13-round championship is produced exclusively by Racer Productions. Cross-country racing is one of the most physically demanding sports in the world. The grueling three-hour GNCC races lead as many as 1,500 riders through tracks ranging in length from eight to 12 miles. With varied terrain, including hills, woods, mud, dirt, rocks and motocross sections, GNCC events are tests of both survival and speed. The series draws talent from all over the U.S., Europe, Japan, Australia and New Zealand. GNCC Racing is televised weekly on NBC Sports and RacerTV.com. For more information, please visit www.gnccracing.com. 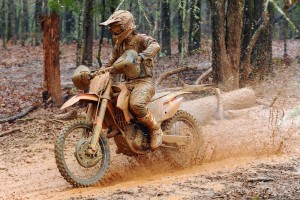 Factory FMF/KTM rider and the reigning GNCC champion, Kailub Russell, took a hard fought win at the second round of the GNCC Series on a very slick and muddy course dubbed "The General."

The reigning champion had his share of difficulties at the opening round of the series a week prior finishing a disappointing 14th overall. He more than made up for it at the second round of the series, where he once again came from behind, but this time to take the win.

Russell was dead last off the start line but quickly made his way through the pack to move into 5th place by the end of the first lap. His teammate, and the winner of the first round, Charlie Mullins, was alongside him in the battle up front sitting in 2nd place. The top five riders battled it out for the next few laps swapping the lead each time one rider stopped for goggles or got stuck in a mud hole allowing the others to get by.

"It was such a mess out there," stated Russell. "The rainfall caused standing water and mud all over the track so it was almost impossible to read lines. I tried to ride a smart race in order to make as few mistakes as possible which ended up paying off in the end." 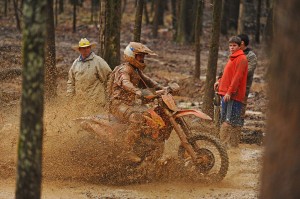 Mullins led for the second and third laps before he got stuck on the fourth lap of the race. He lost a lot of time after he got stuck which dropped him back to 5th place in his class. That allowed Russell to move ahead out front. Russell went on to lead the final two laps of the race to take the win by only a 4 second margin over XC2 Pro Lites rider Grant Baylor. The KTM support rider and reigning XC2 Pro Lites champion, put together a tremendous ride through the mud-covered course to nearly overall the race. He won his class by an impressive margin and finished 2nd overall for the day.

His older brother, Steward Baylor, was not as fortunate. Baylor got stuck in the mud on the last lap and fell back a few positions to finish the race in 8th place. Mullins was able to hang on to 5th place in his class and 6th in the overall score. After two rounds, Mullins still holds the points lead over Paul Whibley in second and Russell in third.

Factory FMF/KTM rider Kacy Martinez put together her second win in a row in the Women's WXC class. She had a decent jump off the line and moved into the lead within the first mile of the race. At one point she had a minute and a half lead before getting stuck in the mud. She was able to recover from that mistake and climb back out to the front of the pack to take the win and increase her lead in the series point standings.