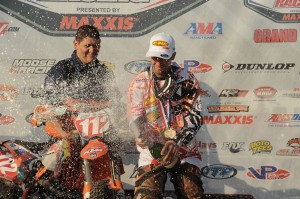 Factory FMF/KTM Team rider Charlie Mullins kicked off the year the best possible way when he took the win at the opening round of the GNCC XC1 Series held at Mud Muckers Ranch.

The win did not come easy to Mullins, who along with his teammates Steward Baylor and Kailub Russell crashed together in the first corner of the race. All three team riders restarted quickly but were at the back of the back heading to the woods.

By the end of the first lap, Mullins had already moved into third position while Russell was sitting in eighth. Mullins continued to push forward and found himself challenging for the lead on the second lap. He was able to pass Whibley to take over first and began a battle with Whibley that would last the next three laps. 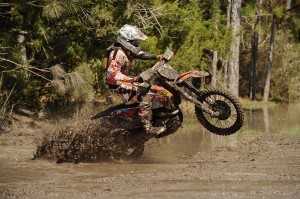 Mullins made the pass for the lead stick with two laps to go and was able to stretch his lead to the finish. When he crossed the checkered flag to take the win, he had grown his lead to nearly two minutes over Whibley.

"I knew my conditioning was good coming into this race, I just wasn't sure what to expect of the course. I had fun and I am glad to come away with the win at the opening round," stated Mullins. 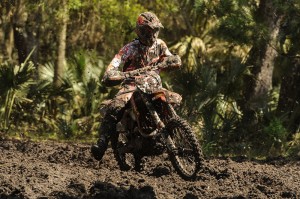 His teammate, Russell, had a great race going until the fifth lap. Russell had moved from his last place start through the pack to third position before he encountered a problem with his bike. He had trouble getting the bike started after coming in for his second pit and lost significant time. Despite his troubles, he was able to ride the bike in for a 9th place finish in the XC1 class and 14th overall for the day.

"I had some bad luck today," stated Russell. "I had a few crashes in the beginning of the race and then some trouble with my bike in that second pit. Luckily, I was able to salvage some points at this round. Now I just need to get some wins moving forward to close the point gap."

Baylor, in his first season back since his wrist injury, was able to finish 6th overall for the day. 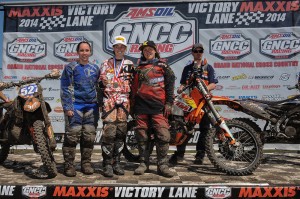 "I was hoping to get a top five finish here," commented Baylor. "I came really close to that spot but I have some work to do. My wrist still isn't 100% but we are working on that and my conditioning each week and I am hoping to get into the top five at the next round."

In the Women's class, Kacy Martinez, was able to pull off a dominate win in her first race with the Factory FMF/KTM Team. She won by five minutes over fellow KTM rider Mandi Mastin.