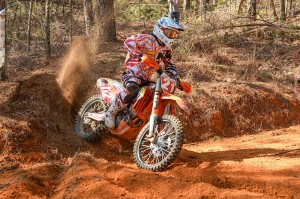 Factory FMF/KTM rider and reigning champion, Charlie Mullins, dominated the opening round of the AMA Rekluse National Enduro Series taking five of the six special test wins on his way to victory in the dirt bike race.

Mullins was on the gas from the first test section onward. "I actually had a pretty hard crash in the first test but still managed to pull the fast time," stated Mullins. His test time in the first section was 7 seconds better than the next competitor and he went on to win the next four sections putting together mistake-free rides. Heading into the final test, Mullins was up two minutes over the competition.

"I decided to take it easy and make sure I finished the final test safely," commented Mullins. "It was a shorter test and I just focused on finishing the test to ride it in for the win." At the end of six tests, Mullins took the win by 1 minute and 34 seconds over KTM support rider Jesse Groemm. 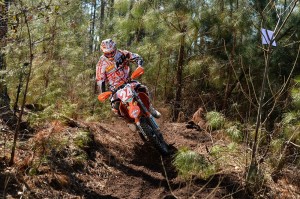 Eight-time National Enduro Champion Mike Lafferty battled with his teammate, Steward Baylor, throughout the race for the final podium position. The two teammates were within seconds of each other until the fifth test where Lafferty got turned around. Lafferty lost over 2 minutes in that section which dropped him to fifth in the rankings. Baylor rode a strong pace in the final section to maintain his position and grab the final podium spot, allowing for a KTM podium sweep.

"I am so bummed I got lost in that fifth test," stated Lafferty. "I felt really good all day and was definitely a podium contender. It is so hard to know that I didn't get on the podium because of a simple mistake. The good news is I know where I stand speed-wise and I am going to be fighting for podiums at the next round." 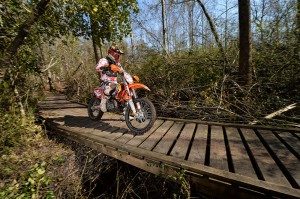 Baylor, who is returning for his first full-season since a wrist injury over a year ago, was happy with his performance. "My wrist was pretty sore throughout the race and I jarred it a few times but I am happy I was able to get some good results in the final few tests. I came on strong at the end and was able to find my way to the podium."