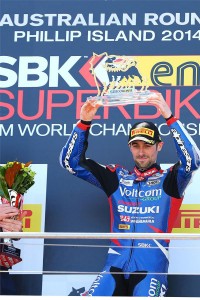 stormed to victory on his Voltcom Crescent Suzuki debut in race one at Phillip Island in Australia today, securing the first World Championship win for the Japanese manufacturer since 2010.

Laverty fought back from a difficult start and made his way through from seventh to hunt down the leading pack of Giugliano, Melandri and Guintoli from lap seven. The Irishman advanced on the leaders, making his break for the lead on lap 17 and didn't look back. The Yoshimura-powered Suzuki GSX-R1000 firmly controlled the pace for the remaining five laps bringing the first victory for Crescent Suzuki on the world stage.

Race two again saw Laverty challenging for the lead; a brief battle in the opening laps resulted in the Suzuki GSX-R sport bike again dominating the mid-race before a mechanical issue brought about an early end to the weekend's activities.

Alex Lowes - battling the ankle injury sustained in Saturday's free practice - looked to be finding a strong rhythm in his debut race in the eni FIM Superbike World Championship, before a crash at turn one saw his efforts halted prematurely. Regrouping for race two, the Englishman's team worked tirelessly to rebuild the Voltcom Crescent Suzuki GSX-R1000 and despite running-on at turn four in the opening lap, Lowes' determination saw him charging through the field and into the top 10, from 21st, in just five laps. He posted his fastest lap of the race on his second lap and held the fastest time for a further 10. The ankle injury ultimately compromised his race and after a further mistake at turn four, Lowes finished his debut weekend with three points and a top-13 finish to show for his brave efforts. 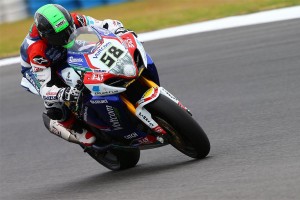 Sunshine, blue skies and a pleasant 22Â°C greeted the crowd as the track temperature fluctuated by more than 10 degrees between the two races, peaking at 48Â°C for the afternoon's event.

As the championship prepares to travel back to Europe, Aprilia's Sylvain Guintoli heads the standings with 41 points, Laverty's win positions him in fifth and Lowes begins his rookie campaign in 15th.

Voltcom Crescent Suzuki will now use the month-long break to re-evaluate the data from this weekend's racing before preparing for the first European leg of the World Championship with a private test at Jerez on March 31st ahead of the second round of series at Aragon in Spain on April 13th.


Eugene Laverty:
"A day of highs and lows! The first race was incredible! To be so far back on the first lap and come through to win; it was the perfect race for us and a nice way to pay back the whole team for the belief they've shown in me. Paul Denning worked hard to get me on board and he delivered everything I needed. He brought in my Crew Chief Phil Marron, Davide Gentile to work on the electronics and Stan; who I've worked with before. All the rest of the boys have welcomed me, so it was nice to be able to reward them with the win right away, and it's a win that means more to me than any so far in my WSBK career. The second race was a disappointment for everyone. We didn't deserve that - that's for sure - but that's racing and unfortunately that's how it goes sometimes." 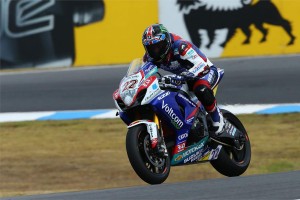 Alex Lowes:
"I'm frustrated with today. I tried really hard and don't have a lot to show for it really. The first race crash, and in the second race the run on; on the first lap and then the crash later was all because I was struggling to change gear with my foot. I had a numbing injection, lost a bit of feeling and I couldn't change gear so it was hard work! I was riding through the pain, so to just get three points has upset me a bit because we had such good pace all through the test. I've never been here before and we were still looking like we could run at the front and challenge for a podium so I'm really disappointed, but I'm going to come back fitter and stronger and we should be ok for Aragon."


Paul Denning - Team Manager:
"It's very strange to have won our first ever World Superbike race - and in such a dominant fashion - and still be leaving Phillip Island feeling very disappointed! As a team we are very sorry to have let Eugene down in race two when another podium - and quite possibly another win - was on the cards. We will do everything in our power to ensure it's the last time!"

"The additional disappointment is for Alex who was so unlucky to dislocate his ankle in the Saturday morning crash as many other riders crashed heavily and got away with it. The injury made it impossible to enter the corners properly and inevitably the difficulty in down-shifting gears caused the mistakes in the races. The frustrating thing is that he was still so fast and could have joined the fight at the front."

"I have to once again thank the team and all our partners for getting us and the Suzuki GSX-R back into the winner's circle and on top of that, thank Eugene for believing in this project and for riding with such aggression, precision and outright desire to win."