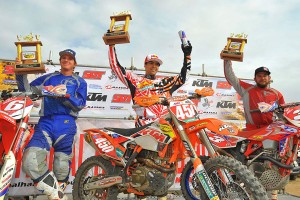 Factory FMF/KTM Team rider Ivan Ramirez took his first career AMA National Hare & Hound victory at the opening round of the series held in the Lucerne Valley desert, a win he credited to his long-time friend and mentor, the late Kurt Caselli.

Ramirez was on his A-game from the start of the race. He nailed the holeshot coming out approximately three bike lengths ahead at the end of the long bomb run. By the first gas stop, Ramirez had already stretched his lead to a full minute on the rest of the pack.

"Ramirez looks very comfortable on the new bike," commented Factory FMF/KTM Team Manager Antti Kallonen. "We switched to the new SOHC motor this year after months of testing with the new engine last season. The KTM 450 XC-F is a great bike for this series and we plan to run this chassis and motor set-up for the remainder of the rounds." 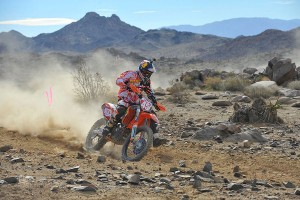 Ramirez continued to navigate the rocky and technical course faster than his competition and pulled his lead to a total of three minutes by the time he crossed the checkered flag to clinch his first career win.

An emotional Ramirez hugged and celebrated with his family, the Caselli family and his KTM team as he made his way to the podium. "I have been working extremely hard and want to win as many races as I can for my teammate Kurt. He helped me so much in my career and believed in me and I am so proud to stand up here for him. I know he was with me today," commented Ramirez.