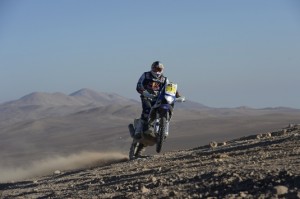 A great performance today by the Yamaha Factory Racing riders saw Cyril Despres take his second special stage victory of the 2014 Dakar Rally. Despres had moved into the lead of the special by the second checkpoint and moved into a neck and neck battle with Coma, managing the fastest time of the two to seal the win. The stage victory moves Despres from sixth up to fourth in the overall standings, just 14 minutes from second position with one 350km special stage left to run tomorrow, El Salvador to La Serena.

Fellow rider Olivier Pain was less than six minutes behind Despres in third position. Pain's result was doubly impressive considering the Frenchman had not one but two falls during the stage, bending his handlebars in the first. The third place finish moves Pain up to third overall in the standings and a provisional podium finish for the 2014 Dakar.

Michael Metge was not as lucky as his teammates today, the third Yamaha Factory Racing rider lost valuable time with a broken sensor, leaving him in 42nd at the end of the stage and 13th overall.

Venezuelan rider Nicolas Vagnoni continues to hold the overall lead for the G2 Marathon class on his Yamaha WR450 machine. With a 45 minute lead over second place, a steady ride tomorrow should deliver the class win.

Chile's Ignacio Casale took the penultimate special stage on his Yamaha Raptor 700 quad to hold his overall lead in the standings whilst Polish rider Rafal Sonik makes it a provisional Yamaha one-two.

"A good day - I really enjoyed myself. As I expected, I caught Marc (Coma) quite quickly, he let me pass and then once again I opened the piste until the end of the special. Now there's only one relatively short stage before the end and I'm just a few minutes off the podium. As is the tradition at Yamaha, there are no team orders, so I'll continue to ride as I have since the start of this race, to try and finish in the best position possible."

"I was having an excellent day right up until 15 kilometres to the end in the sand dunes when I went over the front of the bike. The handlebars were bent in the crash and in all I reckon I lost about 5 minutes, which means that Cyril (Despres) moves a little closer. Since the beginning of this race a podium position has been my goal and I will ride tomorrow with the intention of achieving that goal."

"My bike stopped at kilometre 280 with an electrical problem and so I started checking all the connections until I got the bike running again. It took a while and it was so hot out there in the middle of nowhere that I was worried I'd suffer heat stroke. Fortunately some Chilean guys turned up on moto-x bikes and poured water all over me to keep me cool. Without them I'd have really been in trouble."