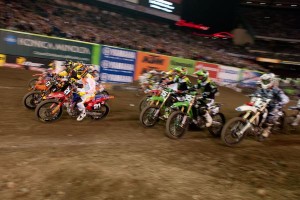 Feld Motor SportsÂ® announced today that Monster Energy AMA Supercross, an FIM World Championship, will celebrate its 40th anniversary this Saturday, January 18, as the world's best riders return to Anaheim, Calif., and Angel Stadium for the third race of the 2014 season.

The 40th Anniversary Celebration Race will honor the champions of both past and present, in addition to celebrating the nostalgia and illustrious history of this one-of-a-kind sport. The track inside Angel Stadium will mimic the layout from the 2001 season, which signified the changing of the guard from one legend to another as Ricky Carmichael won his very first 450SX Class title and Jeremy McGrath completed his final full season of competition, winning one final time in Anaheim to set the landmark record of 72 victories. 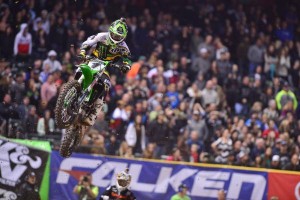 The first race held in Anaheim was on December 4, 1976, and Mart Smith won on a Honda. This weekend will mark the 62nd time the gate will drop for a 450SX Class race in Anaheim and the 24th time the city has played host to the season opener. James Stewart, Ricky Carmichael and Jeremy McGrath are tied on the all-time 450SX Class win list at Anaheim with 8 victories. Ivan Tedesco holds the 250SX Class all-time win record in Anaheim with 5 victories. Angel Stadium is the only stop on the tour that will host three races - January 4, January 18 and February 1.