Yamaha Riders Back on Track on Day Six of Dakar 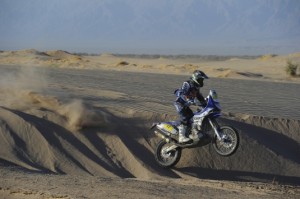 The sixth stage of the 2014 Dakar proved to be a turn of fortune for the Yamaha Factory Racing riders after a difficult couple of stages. Frenchman Michael Metge impressed with his best ever stage finish, closing down the leaders over the stage on his Yamaha YZ450F Rally to finish in third place. The result moves him up to 13th in the overall standings.

Cyril Despres was another Yamaha rider on the move. Showing the speed and skill that has earned him five Dakar titles, the defending champion started in 17th position and carefully upped his pace to come home in fifth at the end of today's special. The result raises him up to just outside the top ten in 11th position with half the Rally still to go.

The last of the Yamaha Factory riders Olivier Pain was less fortunate. A navigational error following the wrong marked tape early in the stage cost valuable tine, leaving Pain to complete the day in 14th position. The ride was however good enough to move Pain back into sixth overall. The riders now take a day of rest tomorrow at Salta before resuming the Rally on Sunday.

"This morning, at the start of the first special, Cyril said to me 'enjoy yourself' by which he meant 'ride your own race'. Then when we saw each other again at the refuelling he compared the amount of dust we each had on our jackets and said, 'maybe you should calm down a little'. And that pretty much sums up the conflicting demands of racing a motorcycle on the Dakar. You have to 'enjoy' yourself on the bike, feel relaxed and happy, to ride well, but at the same time you have to set yourself limits, ride at a percentage of your maximum ability. I'm naturally really pleased with the result, but what the lesson I learnt today was much more important."

"After yesterday's problems I started 17th this morning and obviously had quite a lot of dust to contend with over the first 100 or so kilometres - fortunately most of the riders who I caught were very fair play and let me through. At kilometre 35 I had a small crash and burst my which meant I had nothing to drink. The only solution was to 'borrow' a couple of bottles off spectators at the side of the piste. Then at kilometre 210 I came across the spot where Lopez had his crash. Looking at where he came off it must have been a big one! Now we are at the rest day bivouac and have a day to sort ourselves out for the second half of the race. They call it a rest day but there'll be plenty to keep us occupied!"

"Yesterday I lost time with the navigation and the same thing happened again today. There was an 'enduro' section in the first special that the organisers had marked with tape. The trouble was that I missed the first section of tape and found a second lot of tape that must have been from the route before they modified it and I followed that for about 7 kilometres. It's frustrating because in two days I've lost at least 30 minutes with stupid errors and without out that I'd be right up with the leaders."