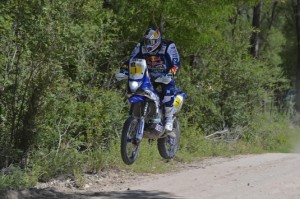 The second day of the 2014 Dakar Rally proved to be a challenging one for Yamaha's Dakar riders in Argentina as they tackled Stage 2, San Luis to San Rafael. The day's riding included some of the fastest sections of the rally and the competitors first taste of sand dunes. Yamaha Factory Racing rider Cyril Despres had a day to forget after a fall cost several minutes. Luckily the defending Dakar champion was unhurt and quick to continue on his Yamaha YZ450F machine, wrapping up the stage in tenth to take eight overall at the end of the day.

Olivier Pain was the next rider to finish, taking 12th on the 359km Special stage to sit 13th overall. Yamaha Netherlands Verhoeven rider Frans Verhoeven completed a second steady day to finish the stage in 16th, taking 15th overall. Michael Metge was the last Yamaha Factory Racing rider in the Special stage rankings, taking 22nd. Metge's GPS system is currently being investigated after the Frenchman was penalized 41 minutes for an alleged late arrival at the bivouac yesterday.


Cyril Despres - Yamaha Factory Racing
"I arrived a little too quickly on a note in the road book at around kilometre 250 and went over the handlebars. Fortunately it was a soft landing so the bike wasn't damaged but it took me a while to dust myself down and get going again and inevitably I lost time. Overall a day to forget."

Olivier Pain - Yamaha Factory Racing
"The stage started off really fast and finished that way too, but in between there was a nice section of dunes, a little like Le Touquet, which was really fun to ride. I got a little stuck in the dust early on but made up some time in the sand and as a result moved up a little in the overall rankings. Now I'm approaching the top 10 and am well placed on the eve of the first marathon stage."

Frans Verhoeven - Yamaha Netherlands Verhoeven
"Mainly fast today with some dunes and a few river beds, quite technical in places. Like Olivier I got a little stuck in other peoples dust but that's part of the race. In the past I might have got overexcited in that kind of situation and tried to overtake in an inappropriate place but now I'm older but wiser. My intention here isn't to take chances and put in a good time one day only to lose it the next. This year my strategy is to build my race slowly but surely and see where that leaves me at the final finish."

Michael Metge - Yamaha Factory Racing
"It was an OK day until I got into the bivouac and discovered that the officials had given me a 41 minute penalty for supposedly arriving late at the bivouac yesterday evening - something I don't understand at all as I came in at the same time as Cyril. Currently the organizers are looking at my GPS to check when I actually arrived and hopefully all that should be cleared up this evening. It kind of took the fun out the day..."