One Pricey Piece Of Leather: Unleash Your Inner Terminator 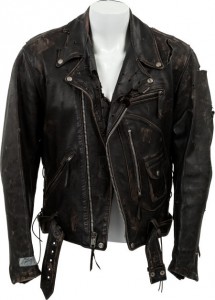 If you're an Arnold Schwarzenegger super fan or Terminator maniac you have the chance to own an iconic piece of movie memorabilia-for a small fortune. Heritage Auction (ha.com) will be auctioning off the bullet hole-ridden leather jacket Arnold wore in the film Terminator 2: Judgment Day.

While not as memorable as his "I'll be back" catchphrase in the first flick, the line "I need your clothes, your boots and your motorcycle" that Terminator Schwarzenegger stoically states at the beginning of T2 resonates with motorcycle enthusiasts, because he then goes on to forcefully confiscate a biker's prized possessions, his leather motorcycle jacket and his Harley-Davidson Fat Boy-a nightmare scenario which any motorcyclists can relate to. Throughout the rest of the movie the Terminator is seen wearing the biker's leather jacket, with one of the most memorable scenes being when the Terminator uses his back as a shield for the young John Connor and the jacket gets the Swiss cheese treatment from machine gun fire. 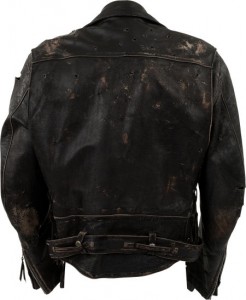 Heritage Auction will host the auction with the opening bid starting at $8,000 and the jacket is estimated to fetch up to $16,000. For those that don't recall, it's a traditional black leather biker's style jacket. The jacket was consigned directly to Heritage Auctions by Ron South, the Second Assistant Editor on the film, who obtained it after production wrapped. The torn and tattered jacket includes a Letter of Provenance from Mr. South attesting to this.

There are very few men's leather motorcycle jackets that are as memorable as this, the few that come to mind are The Fonz's from Happy Days and Marlon Brando's in The Wild One. Just think, you could be as cool as those guy's for the price of a brand new Fat Boy. Or you could save your money and buy a leather jacket, textile jacket, and a motorcycle vest that you'd actually wear and still have thousands of dollars left over.