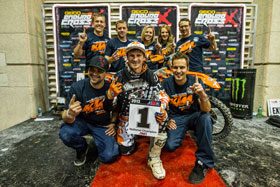 Taddy Blazusiak clinched his fifth consecutive AMA EnduroCross Championship with a win in Las Vegas this past weekend. Unlike in some previous years, however, this title chase came down to the wire, with both Blazusiak and his KTM teammate Mike Brown in contention as they began the final race of the 2013 season.

Blazusiak and Brown entered the event, which was held at The Orleans Arena, tied for the overall points lead. All that remained was a head-to-head battle to determine the champion, and the final dirt bike race did not disappoint fans of motorsports. The two riders went back and forth throughout the Nov. 23 event, navigating through several group crashes and complicated sections.

Eventually, Blazusiak finished fifth, while Brown crossed the finish line in ninth place after suffering from a fall in the second half of the race. The mishap was enough for Blazusiak to extend his lead over his competitor, and it gave the Polish rider the championship for the fifth straight year.

"That was one of the most exciting races I have ever had in my life," said Blazusiak. "It was so much fun to battle with Brown this year, and I am excited we were both able to keep it clean while we battled for the championship."

Cody Webb won the event, which was enough to place him in third overall for the season behind Blazusiak and Brown.